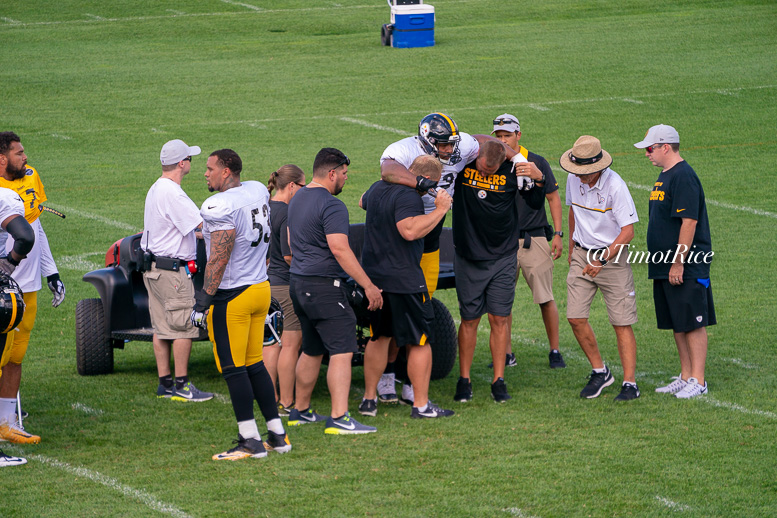 It appears as though the Pittsburgh Steelers have dodged a huge bullet when it comes to guard Ramon Foster suffering a right knee injury during the team’s Saturday training camp practice.

According to Aditi Kinkhabwala of the NFL Network, Foster hyperextended his knee when he went down injured Saturday and did not suffer any ligament damage and more importantly, will not need surgery. He is expected to be out the next 4 or 5 weeks and thus hopefully ready for the Steelers regular season opener against the Cleveland Browns.

Huge sigh of relief from #Steelers camp. LG Ramon Foster hyperextended his knee, but did not suffer any ligament damage and will NOT need surgery. Should be out 4-5 weeks.
Remember: no Steeler has logged more snaps since 2009 than him.

#Steelers LG Ramon Foster also has some bone bruising. But his (and the team’s) goal is still that he returns in time for Game 1.

Foster, now in his 10th season with the Steelers after being signed originally as an undrafted free agent out of Tennessee in 2009, was carted off the practice fields of Saint Vincent College in Latrobe midway through the team’s Saturday practice. After practice was over, head coach Mike Tomlin would only say that Foster would be further evaluated and that he wouldn’t speculate as to the seriousness of the injury.

With Foster sidelined for the time being, B.J. Finney will likely take the starting left guard reps.

It will now be interesting to see if the Steelers sign another interior offensive lineman with Foster expected to be sidelined for the rest of training camp and the preseason. The Steelers fourth training camp practice of 2018 is scheduled to get underway later today and it will be the team’s second one in pads.