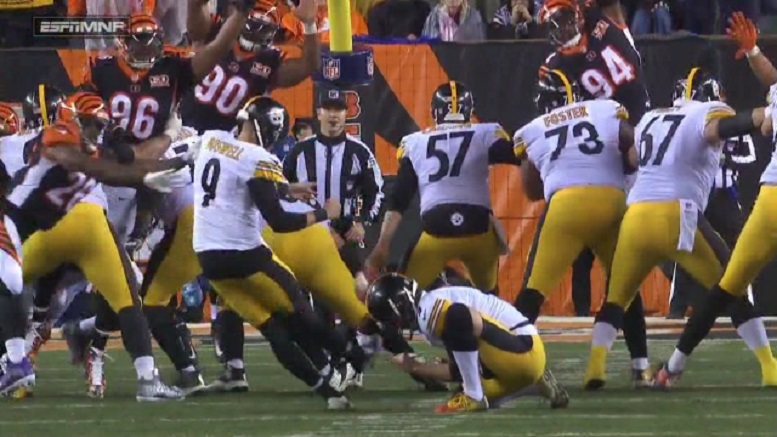 For the third straight year, we’re continuing the Ranking the Rooms: AFC North series here at Steelers Depot. You can find the latest rankings here. Today, we’ll close out the series by taking a look at the AFC North specialists.

Here is the 2017 Ranking the Rooms:  AFC North specialists list:

Let’s take a look at the 2018 list for specialists in the division.

Justin Tucker can hit from nearly 60 yards out on a consistent basis, and he’s as consistent as the sunrise. Tucker has quite a personality for a kicker, but he’s the best in the business for a reason.

Punter Sam Koch, and long snapper Morgan Cox return for the 13th and ninth season, respectively. Koch doesn’t have a huge leg, but he’s great with directional kicks, and has a knack for downing the ball inside the opponent’s 20-yard line, setting up the Ravens’ defense in a position of power.

Chris Boswell has been quite the find for the Pittsburgh Steelers, who held an in-season tryout to try and fill the kicking hole. Boswell has come in and hit 85 of 95 kicks since becoming a Steeler, reaching the Pro Bowl for the first time last season.

Punter Jordan Berry is hit or miss (no pun intended) for Pittsburgh, and he’ll have to fight for his roster spot this summer at Latrobe, thanks to the addition of Matt Wile to the off-season roster.

The Bengals let Jake Elliott walk due to roster cuts at the end of training camp. Elliott went on to play for the Philadelphia Eagles, hitting a number of clutch kicks throughout the season on the way to a Super Bowl ring.

Now, the Bengals are left relying on veteran Randy Bullock, and first-year kicker Jonathan Brown at kicker. Bullock did go 18-for-20 last season, providing the Bengals with some stability, but Cincinnati would have been better off with Elliott.

At punter, Kevin Huber returns for a 10th season. Huber received a ton of work last season, punting the ball 88 times, averaging nearly 47 yards per kick. He’s as consistent as they come.

Long snapper Clark Harris also returns for his 10th season, providing a consistent connection with Huber in the punting game.

Rookie kicker Zane Gonzalez closed the season strong for the Browns, finishing with 15 made field goals, missing just one kick in his final eight games. Gonzalez will have some competition in training camp, as rookie Ross Martin joins the fold.

At punter, Dustin Colquitt will have to hold off second-year punter Justin Vogel, who comes over from the Green Bay Packers after just one season in which he averaged 44 yards per punt. Colquitt saw his average decline the last two years before jumping up to 47 yards per punt last season.

Long snapper Charley Hughlett returns for another year with the Browns. His low snap last season to open the season resulted in a blocked punt by the Steelers for a touchdown.