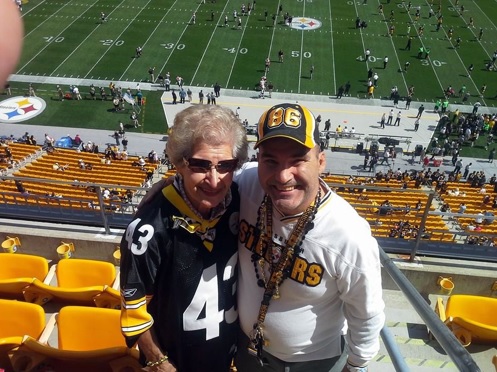 It is easy to forget about the football fan in these days of the multibillion dollar professional football industry; debates about whether a running back is worth $17 or $14.5 million a year; the year-round mantra of player transactions, transgressions & transformations. Now we have news about owner’s transgressions and the building of a stadium so that a team can move from one city to another.

I’d like to step away from all that for a moment to reflect on one fan. Mrs. Zafero Tsikerdanos has attended nearly every home game for 30 years. I got a snap with her before the Steelers home opener against the Cleveland Browns on September 7, 2014. But she was a fan for a long time before that …

Mrs. Tsikerdanos lived in Maryland almost 50 years but is still a diehard Pittsburgh Steelers fan. Her earliest memory of the Pittsburgh Steelers was in 1949 after she had moved to Maryland with her beloved husband Ernie -a decorated war veteran. They were listening to a game and the Steelers lost and Ernie threw their only radio against the wall. My bet is that he slept on the couch that night.

They remained Steelers fans through the 1950’s and ‘60s. Not a fashionable time to remain loyal to a football team that had only four winning seasons in two decades especially from 200 miles away. There weren’t many Steelers fan living in the DC area to share the agony with in those days. 1970 was the beginning of a new era though few knew it at the time. Remember in 1969, Chuck Noll’s first season as Steelers coach; the Black & Gold were 1-13 – the worst record EVER in Steelers history (unless you count the 1944 joint efforts of the Card-Pitt team that was 0-10). Nevertheless, Ernie & Zafero bought their first season tickets when Three Rivers Stadium opened in 1970.

Thus, began a ritual of driving to Pittsburgh from the Washington DC suburbs to watch the Black & Gold make history. Work and travel prevented Mr. & Mrs. “Chick” from attending every game, but they always made sure their seats were occupied by family or friends. For Mrs. Tsikerdanos, being a Steelers fan was a family affair. Her husband Ernie got them started and the whole family cheers for the Black & Gold when they play. She stays a fan because she sees the team as a blue collar, hardworking team – like the people of Pittsburgh were. 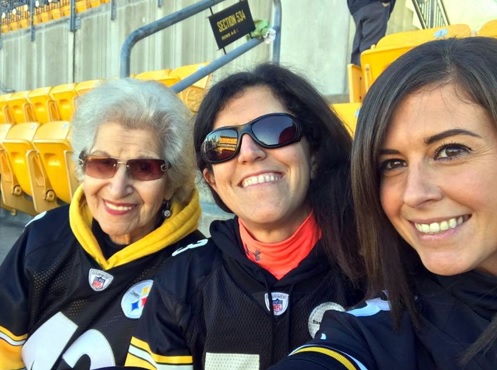 Mrs. Tsikerdanos showing some of her younger family members the way.

Around 1990, Ernie & Zafero moved to southern Pennsylvania to be closer to their family and to shorten the drive to Pittsburgh. Mrs.Tsikerdanos lost Ernie in 1997 after he succumbed to cancer. Mr. Tsikerdanos had quite a colorful career and his record speaks for itself. Coach Bill Cowher sent the family a condolence letter after his passing lamenting that he had learned “that the most loyal Steeler fan had passed.”

Since then, she has attended almost every home game so Mrs. Tsikerdanos has attended a lot of games in the 48 years she has held season tickets. Her all-time favorite game wasn’t played in Pittsburgh. Zafero and Ernie attended Super Bowl XIII when the Steelers beat the Dallas Cowboys 35-31 at Miami’s Orange Bowl. But, her all-time favorite play she has seen in person is of recent vintage. It is Antonio Brown’s game winning touchdown catch on Christmas Day 2016 against the Baltimore Ravens.

She loves all the Steelers players but her favorites from the past are Joe Greene, Jack Lambert, Rocky Bleier, Hines Ward and Troy Polamalu. Ben Roethlisberger and Ryan Shazier are her favorites that have played recently. The closest she got to meeting a Steeler is getting a wave from Lynn Swann one time.

Despite the glory years of the 1970’s, she prefers Heinz Field over Three Rivers stadium. It has more conveniences and more comfortable seats. The only change she would make to improve the experience at Heinz Field are heated seats – at least hers. But she does miss Three Rivers because of the fans they got close to over the years – they were like family. A piece of Three Rivers Stadium is still with the family. Cousins bought the seats that Ernie & Zafero sat in all those years. The two seats are bolted securely to their concrete patio. She thinks Steelers fans are always good but feels some of the newer fans demand too much. I guess we’re a little spoiled.

The Ravens and the Bengals are the two teams she roots against most passionately.

Mrs. Tsikerdanos does have rituals to follow on game days. She always parks at the same spot, wears the same clothes, enters through the same entrance, sits in the same seat and NEVER washes her Terrible Towel. She also NEVER leaves a game until the final whistle. Mrs. Tsikerdanos has the following advice for fans attending their first Steelers game: “Dress for the weather, enjoy the game, don’t stop cheering – stay until the end always!” 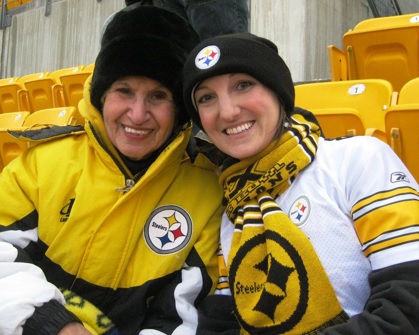 Mrs. Tsikerdanos with her Granddaughter during pregame warm-ups of the January 15, 2011 playoff game versus the Ravens where goodness prevailed 31-24.

Win, lose or draw Mrs. Tsikerdanos loves her Steelers. Currently she ranks Chuck Noll as the best Steelers head coach followed by Bill Cowher and then Mike Tomlin. A Super Bowl win following the 2018 season might alter that a bit.

Many thanks to Elaine Salb who interviewed her mother while she was hospitalized this Spring. Best wishes to a full recovery and hope to see you at a game this Fall Mrs. Chick!

In the 2018 Memorial Day Weekend: Steelers Friday Night Five Questions, I committed to play songs that Steelers Depot respondents had suggested might be the new Steelers anthem if Renegade by Styx was ever replaced. Here is entry five of 45 from Alan TMan: Simply the Best by Tina Turner. 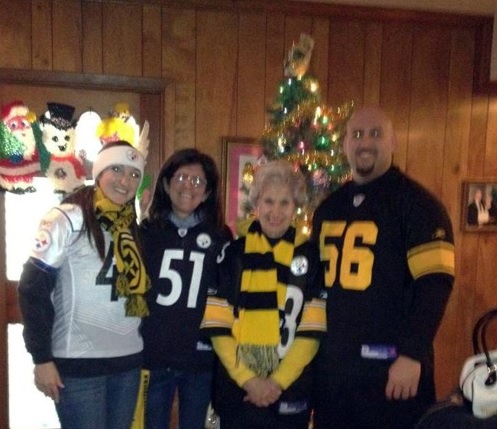