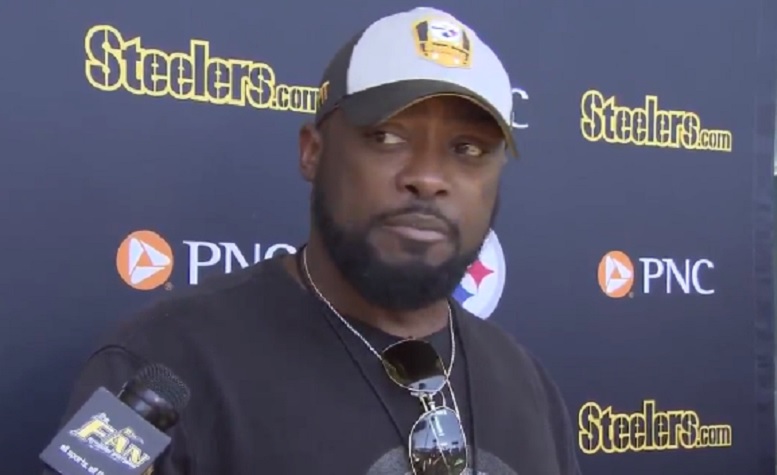 Since 1997, approximately 7,000 children have reportedly participated in the annual Hampton Roads All-Star Football Camp in Hampton, Virginia, the hometown of Pittsburgh Steelers head coach Mike Tomlin. Each summer for the last 10 years, Tomlin has played a big part in the camp that has long included a Meet and Greet session with him. Also part of Tomlin’s annual trek to his hometown is an interview with Bruce Radar of WAVY TV 10, a local television station.

In his most recent sit-down with with Radar, Tomlin answered various questions on several topics with one being the current contract situation with running back Le’Veon Bell. After talking about Bell’s situation, Tomlin was asked by Radar if being a head coach is sometimes like being a father to teenagers.

“Hey, I tell you, my sons are 16 and 17, now, man, I really see the parallels, you know,” Tomlin said. “It is in a lot of ways because if you want to truly be successful leading the men, it goes beyond the x’s and o’s in football. You got to be willing to help them in growth and development in every aspect of their life and that’s a part of the job that I embrace.”

Tomlin surely does seem to embrace that aspect of his job and that’s why you’ll often times hear him refereed to as being a players’ coach. Tomlin has even made quite an impression on rookie quarterback Mason Rudolph already.

“Its great,” Rudolph said when asked during a recent radio interview what it’s like to be around Tomlin. “He’s everywhere in the building, he’s a walker. He’ll be in the weight room one minute and the training room the next. He gets around and his presence is felt and he’s an unbelievable leader. He’s very close with the players, a players’ coach to the max. He’s got great relationships with the players off the field as well as in the way he commands their respect on it. So, it’s been fun to see him and to kind of develop our own personal relationship.”

It’s hard to say how much longer Tomlin will ultimately be the Steelers head coach. With that said, he’s currently under contract with the Steelers through the 2020 season and so there’s a good bet he remains in Pittsburgh at least that much longer. Tomlin’s sons, however, will be starting college in a few more years and his oldest is already fielding football scholarship offers.

Tomlin has essentially been coaching football since 1995, so he will have been doing that for 25 years when his current contract is set to expire. It would certainly be understandable that Tomlin might want to step away from coaching once his oldest son starts being a regular contributor at the college level. That’s still several years away, however, and Tomlin has given no indication he plans to do that. In fact, he really seems like he hasn’t given much thought yet to life after being an NFL coach.