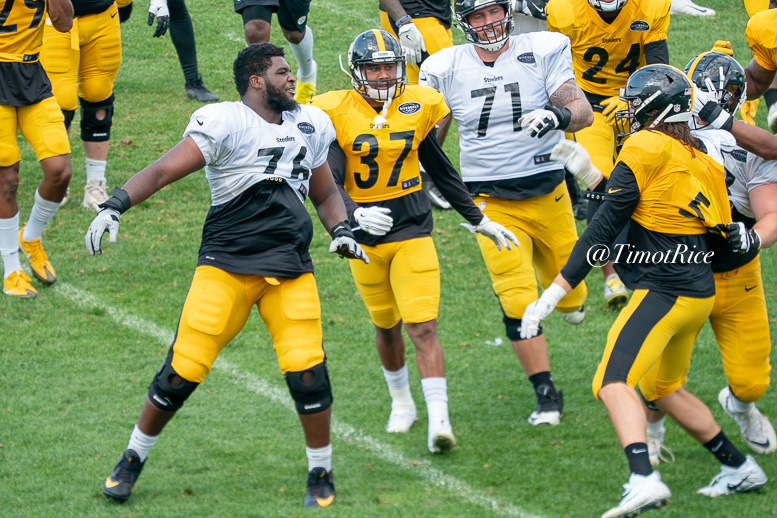 The Pittsburgh Steelers are pretty much counting on rookie third-round draft pick Chukwuma Okorafor stepping up and being able to handle the swing tackle role this season, at least as far as things currently stand. There is not a lot of quality competition for that job; even the veteran that they brought in failed his conditioning test and was released.

The good news is that he doesn’t seem to be in over his head so far, so says his position coach. Mike Munchak was asked about the young man’s early progress and spoke positively of his development now that he has finally worked in pads.

“He did a nice job in OTAs. The physical level is going up now. He’s holding his own”, he told the Pittsburgh Post-Gazette. “He just has to get an understanding of the game, an understanding of what we’re doing. That will take a little while. Right now he’s thinking about his assignments too much; more than the technique. So he’s in that world right now”.

Which should be expected of him. Okorafor only picked up American football after his family immigrated to the United States from Africa as a teenager. He began playing offensive line during his junior year of high school and came out of Western Michigan a year early, where he was a three-year starter.

Let’s backtrack a bit to remind us of how we got ourselves into the position of relying upon a 20-year-old rookie to be the backup tackle at both positions. The Steelers’ swing tackle from a year ago, Chris Hubbard, signed a lucrative contract to take over the starting right tackle job with the Cleveland Browns in March.

Third-year Jerald Hawkins was in the driver’s seat to inherit that position, as he finished last season as the number four tackle and even got a bit of playing time as a tackle-eligible. After he suffered a season-ending quad injury during OTAs, however, the Steelers’ tackle depth from last season was suddenly gone.

There is Matt Feiler, who has primarily been a guard for the team over the last three offseasons. After earning a roster post a year ago at that position, he is beginning to take some reps at tackle again. He was the swing tackle behind Hubbard during the first half of last season. But, ideally, they hope to leave him at guard and not even dress him unless there is an injury.

That will depend upon Okorafor’s rapid advancement. “The preseason games will be big for him”, Munchak warned. Still, he added that they are “obviously very happy with what we see” and that he “has the demeanor, the size and long arms. It’s been fun to watch him”, he continued, before adding, “hopefully we won’t need him right away”.