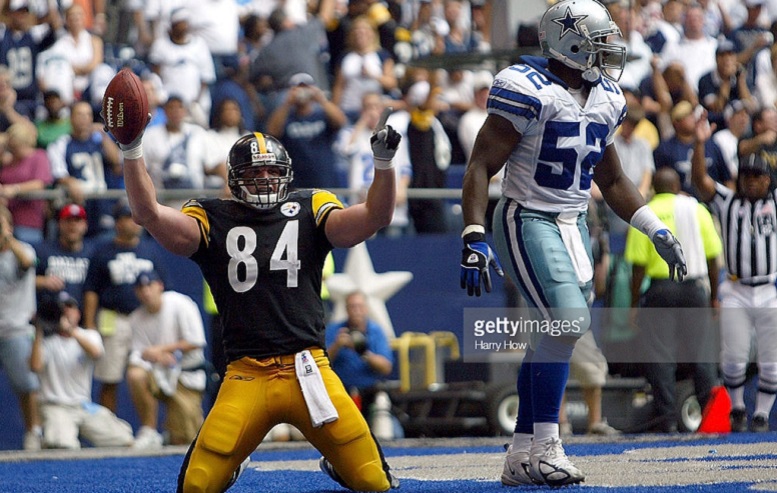 I’ll now continue this series with a look back at the last Steelers player who wore No. 84 before wide receiver Antonio Brown wore it and made it famous.

In 1999 the Steelers spent their first of two fifth-round draft selection on tight end Jerame Tuman, who had played his college football career at Michigan where he caught 95 total passes for 1,240 yards and a touchdown over a span of four seasons. The Steelers had acquired that particular selection, the 136th overall, from the Indianapolis Colts in 1998 in exchange for linebacker Steve Conley. Tuman was the sixth overall tight end drafted that year and during that year’s NFL scouting combine he reportedly ran his 40-yard dash in 4.74-seconds.

During his first two seasons in the NFL with the Steelers, Tuman played sparingly on offense and failed to register a reception in the three total times he was targeted. In 2001, however, he was occasionally allowed to start and his first official reception came in the team’s Week 5 game against the Kansas City Chiefs and in the second quarter. The catch was good for 23 yards.

Tuman’s first career touchdown reception game the following week against the Tampa Bay Buccaneers. That 32 reception actually came via a pass from running back Jerome Bettis in the second quarter. Tuman would go on to catch another touchdown pass from Bettis against the New York Jets during the 2004 season.

While Tuman quickly signed with the Arizona Cardinals following his release from the Steelers in 2008, he only caught 3 passes for 41 yards before ultimately being released later in the season.

Technically, Tuman wasn’t the last Steelers players to be issued the No. 84 before Brown was assigned it during his 2010 rookie season as wide receiver Joey Galloway was briefly issued it late during the 2009 season after he was signed to the team’s active roster. However, Galloway never dressed for any games during his short time on the roster and thus never wore No. 84 during a game.