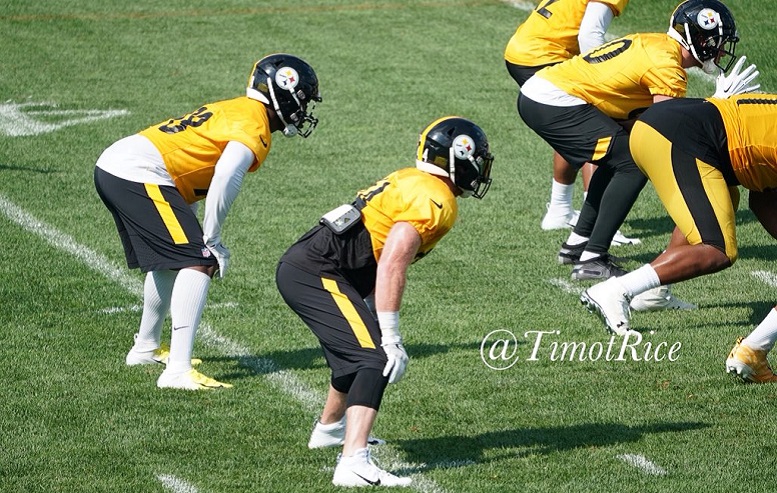 The Pittsburgh Steelers held their first practices of the 2018 installment of training camp at Saint Vincent College on Thursday, and when the starting defense took the field for their first snaps, it was Tyler Matakevich who lined up alongside Vince Williams as the two inside linebackers for their primary defensive packages. This information comes to us courtesy of our own Alex Kozora, who as always is live at training camp right now. You know where to follow along.

But it was soon after that that Jon Bostic was also subbed in with the starters, as Kozora also noted:

Jon Bostic now getting subbed in with the 1’s. #Steelers

These are the first snaps that Bostic has seen working with the starters since he was signed back in March as a free agent. Matakevich ran with the first-team defense throughout the spring, through OTAs and minicamp.

The team is looking to find at least a temporary replacement for Ryan Shazier, the talented mack linebacker who has made the Pro Bowl in each of the past two seasons. Shazier suffered a severe spinal injury that has put the remainder of his career in jeopardy, though he has mad substantial progress since his December trauma.

Pittsburgh was hoping to come out of the first round of the 2018 NFL Draft with an inside linebacker, looking to trade up for Rashaan Evans only to see the Tennessee Titans beat them to the punch. They worked out a deal to move up with the Baltimore Ravens, who would not trade with the Steelers to allow them to get the linebacker they wanted out of principle anyway.

So they enter training camp with the third-year Matakevich along with Bostic, a veteran that they picked up in free agency who had his most successful season a year ago with the Indianapolis Colts. In 14 games, he recorded a career-high 97 tackles. He also had a sack and three passes defensed.

Bostic has been praised for his tackling efficiency and his communications skills. Though he had just signed with the Colts last offseason, not even as a sure starter, he quickly became one of their defensive leaders and their signal-caller on the defensive side of the ball.

Until today, however, the sixth-year linebacker had yet to take any first-team reps with the Steelers. As mentioned, he consistently worked with the second-team defense throughout OTAs and minicamp, with Matakevich being given the full run next to Williams with the starting group.

Matakevich has very little tangible in-game experience, limited to defensive action in only a handful of games, most of which came in short-lived and poorly-performing goal-line packages. He also had a rough preseason in 2017 when he was forced to play with the starters as Shazier dealt with a minor training camp injury.

Still, the coaching staff appears to be giving him a legitimate opportunity to compete for the starting job. It should go without saying that Bostic will get his shots with the first-team group as well, but it is worth relaying to you that Matakevich was given the first snaps with the starters to open training camp, even if it is not a surprise. And that Bostic has now gotten his first reps with the starters as well.

The battle between the two figures to be the only serious competition in Pittsburgh for a starting job, though it won’t be the only one worth watching. There are high stakes for the backup quarterback and swing tackle jobs, and sub-package assignments in the secondary, that are yet to be determined.

Our own Tim Rice is also back in Latrobe, it should be worth mentioning, and providing us our first looks of training camp already. Here are a couple of his shots of Matakevich along with Williams: