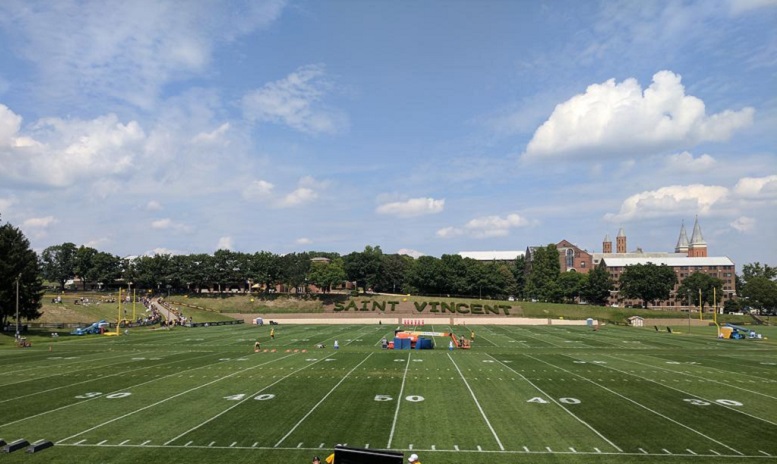 The first training camp practice of the 2018 Pittsburgh Steelers season kicks off tomorrow. So before we learn what’s actually going on, here’s my best guess of what the roster will look like Week One against Cleveland. We’ll update this after every preseason game.

Analysis: We’ll see if Rudolph can beat Jones out for the #2 spot but here, I keep both. Before, I leaned towards Jones being removed from the roster but I think they’re going to value his IQ and mentorship, especially without a true QBs coach. Moreso than Dobbs potential backup value. That is, of course, if they don’t deal Jones for a 7th round pick by the end of camp.

Analysis: I know keeping four running backs is unusual for this team but I just have a gut feeling they want to keep Ridley around and don’t want to part with Samuels out of the gate. That they like what Ridley offers as a runner and if something were to happen with Bell, would want him involved in the offense in some capacity. Because of how this roster is constructed, it allows them to keep a fourth back, a luxury in most scenarios.

Analysis: No debate here. Nix’s spot is safe. As it should be.

Analysis: I’m leaving this unchanged especially now it doesn’t look as likely Eli Rogers is brought back. I think they throw all the names at the wall and see what sticks. They have an obsession with Hunter’s height/weight/speed and Tucker is going to offer value in all areas of the game, from playing outside, to the slot, and on special teams. Big position to watch though.

Analysis: Jake McGee would’ve made this interesting. Now, tight end is one of the most locked-in positions on the roster, unless someone gets hurt.

Analysis: I left Hawkins off last time prior to his injury. The eight from before remain, none really threatened to lose their job. A 9th will have to play their way onto the roster and I don’t love the odds of that happening.

Analysis: Sticking to my guns from before since nothing has really changed to make me think otherwise. Gilmore grabs the 6th defensive line spot thanks to his better versatility than Joshua Frazier or Daniel McCullers. But we’ll see what happens. Situation is totally up in the air.

Analysis: Again, no changes from last time. I’m not as confident in Thomas as others, who are touting him as a super sleeper, but I think he’ll make some splashy plays in camp. It’s about controlling the negative ones and being a more consistent player.

Analysis: Man, you do these predictions and you realize how bleak the LB depth is. Had Arthur Moats on here before but it doesn’t look like he’s coming back. No one else on the roster I feel comfortable adding here until I see them in action.

Analysis: Group feels locked in. Best chance for a change is if someone adds themselves to the roster but I don’t know who it would be. Coty Sensabaugh isn’t offering more than these five can.

Analysis: No changes here. Consider me a fan of Malik Golden but I’m not sure what his path to the 53 is. He’ll land on the practice squad.

Analysis: I think Dobbs can make it through to the practice squad. The bigger concern is if/when someone tries to poach him mid-season when injuries hit. But doesn’t hurt to hold onto him as long as you can. They’ve liked Thomas enough to keep him around and I can see potential there as a return man. Scotland-Williamson is the international exemption. Steelers keep two OLBs because there’s only four on the 53. Adeniyi gets a redshirt, Huguenin had a nice camp last season. Johnson and Golden are quality athletes.