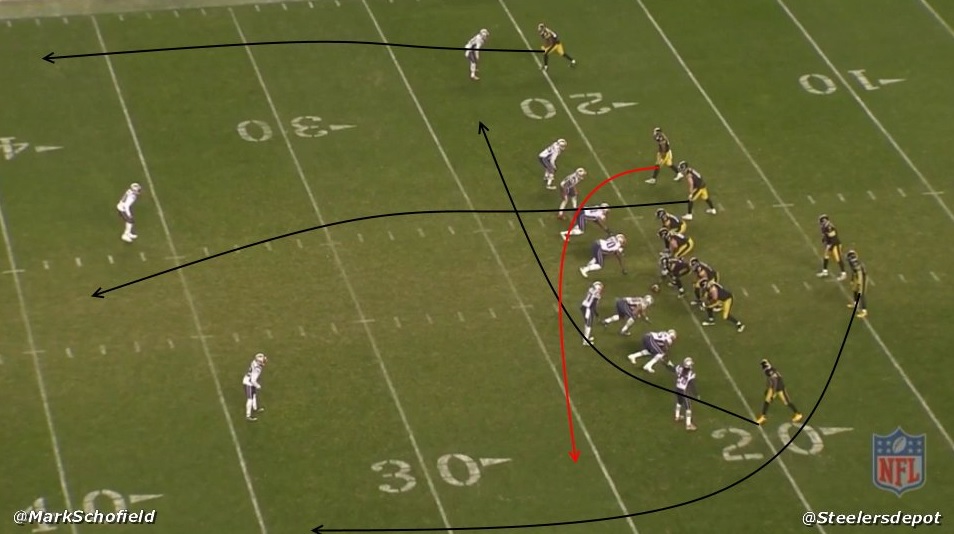 One of the enduring stories of the 2017-2018 NFL season was the emergence of JuJu Smith-Schuster as a star, both on-the-field and off. Beginning with his bicycle, his path to a driver’s license, his exploits on Fortnite and his outfits at Coachella, the young receiver certainly exploded onto the scene as a social media star.

But more importantly was his presence on the field as another option for Ben Roethlisberger in the passing game. Smith-Schuster caught 58 passes for 917 yards and seven touchdowns – one of those going for 97 yards – with the bulk of the work coming before his 21st birthday.

The best offensive coordinators design plays and use players to enhance their strengths and minimize weaknesses, or at least aid the player in those areas. To appreciate his rookie campaign it is helpful to take a look back at how he was viewed coming into the league, before the Pittsburgh Steelers selected him in the second round of the draft, with the 62nd overall selection.

Lance Zierlein at NFL.com described Smith-Schuster as someone who “[s]hows no concern working over the middle” and who is “[r]ugged, aggressive runner after the catch with a stiff-arm to hurt feelings. Has field vision after catch for maximum YAC yardage.” However, he “[c]an be slow to release against press coverage.”

At the Inside the Pylon, draft guide he was our fifth-ranked receiver overall and we described him as someone who did a better job against press coverage “of clearing the cornerback when working to the inside.” In terms of a scheme fit for him, we stated that “he may be best suited for an offense that thrives on quick-moving routes underneath.”

The Steelers often looked to get Smith-Schuster the football underneath on shallow routes, to take advantage of his skill-set as well as his ability after the catch. However, given the fact that he would be facing more press coverage in the NFL than he did in the Pac-12, Haley often used designs, formations and motions to aid the rookie receiver in getting off the line of scrimmage. Given his age, limited experience facing press coverage and room to grow, Smith-Schuster may one day be more effective at working against the press, but until then designs like this can be expected as part of Pittsburgh’s offense.

One of the ways that Haley looked to get the football to Smith-Schuster underneath was by “swinging his sword,” and borrowing a page from the pirate himself, Mike Leach. Leach’s offense relies heavily on the Mesh concept, an underneath crossing route combination that Leach travels the country promoting at coaching clinics.

A prime example of this came on a play that gave me as a New England Patriots fan (please, please do not hold it against me, I come in peace) a near heart-attack: The 69-yard completion late in the fourth quarter of the thrilling Week 15 meeting between the Patriots and Steelers. Facing a 1st and 10 on their own 21-yard line, the Steelers align using 11-offensive personnel and with Smith-Schuster as the middle receiver to the right in a 3×1 formation. Here is how the Mesh looks on paper:

The beauty of this play is in how it has an answer for man or zone coverage. If the offense faces zone coverage, those two crossing routes can simply settle down and find grass against the underneath zones underneath. But if they see man coverage, as they do here, they create traffic and hopefully a natural pick on the man coverage defenders. Here, the Patriots are in man coverage, and the route from Martavis Bryant creates the traffic, freeing up space for Smith-Schuster:

Not only does the route create traffic – and space – for the rookie receiver, but with man coverage across the board Smith-Schuster has room to operate after the catch. He picks up a huge gain, setting up the climactic finish.

Here is another example of this design in action, from Pittsburgh’s Week 6 against the Kansas City Chiefs:

Once more, the Mesh concept works to create traffic underneath. A linebacker trying to stay with tight end Jesse James on his vertical route collides with the cornerback trailing Smith-Schuster across the formation, allowing Roethlisberger to his his rookie receiver for an easy gain of 12 yards and a fresh set of downs for the visitors.

Another schematic way that Haley created space and freedom for his rookie receiver to operate in was by using stack-slot formations. As a Patriots fan and observer, this is something reminiscent of Julian Edelman’s early days as a full-time receiver (and not part-time defensive back). It is difficult to adjust to life against press coverage in the NFL, for former quarterbacks or younger receivers who do not see a lot of press coverage in college. So stack-slot formations are effective in getting a receiver a free release off the line, with that freedom to get into his route quickly and without duress. The Steelers would pair Smith-Schuster’s ability on shallow crossers with these formations with a great deal of success.

Here is the first example of this, coming from Pittsburgh’s Sunday night game against the Detroit Lions in Week 8. The Steelers face a 3rd and 4 in Detroit territory early in the third quarter of a 12-10 game, with the host team leading. Smith-Schuster begins the play split wide to the left, but Roethlisberger motions him in toward the football, into a stack-slot alignment:

Smith-Schuster then runs another shallow crosser:

It certainly helps that the Steelers catch Detroit in a cornerback blitz here, but the premise is the same: The stack-slot alignment gives the rookie WR room to operate off the ball, and Roethlisberger immediately gives the USC product the football with room to work.

Here is another example of this in action, which takes us back to the remarkable Week 15 meeting between the Steelers and Patriots. Early in the game Pittsburgh faces a 3rd and 10 in New England territory, and Smith-Schuster is the middle receiver of a three-receiver set to the right. He comes in “in-and-out” motion, working toward the football and then drifting back outside. When the ball is snapped, he is just outside tight end James:

Smith-Schuster is working against Logan Ryan on this third down. As the play begins, James releases vertically, which changes Ryan’s angle toward the rookie WR. Ryan crashes down to try and get a jam on Smith-Schuster and he does make contact, but it is not enough to slow or derail the crossing route:

The formation and route concept again gives the rookie WR some space to work, and while Ryan does make contact, he does not have the right angle or leverage to truly slow down the receiver. Smith-Schuster works across the formation, pulls in the throw from Roethlisberger and picks up a key first down.

Pittsburgh scored a touchdown on the very next play.

It is expected that the Pittsburgh offense will be similar this season under new offensive coordinator Randy Fichtner to what it was last season under Haley. As Smith-Schuster continues to grow as a receiver, you can expect to see similar designs like this in the office until the young WR rounds out his skill-set as a player in the NFL.