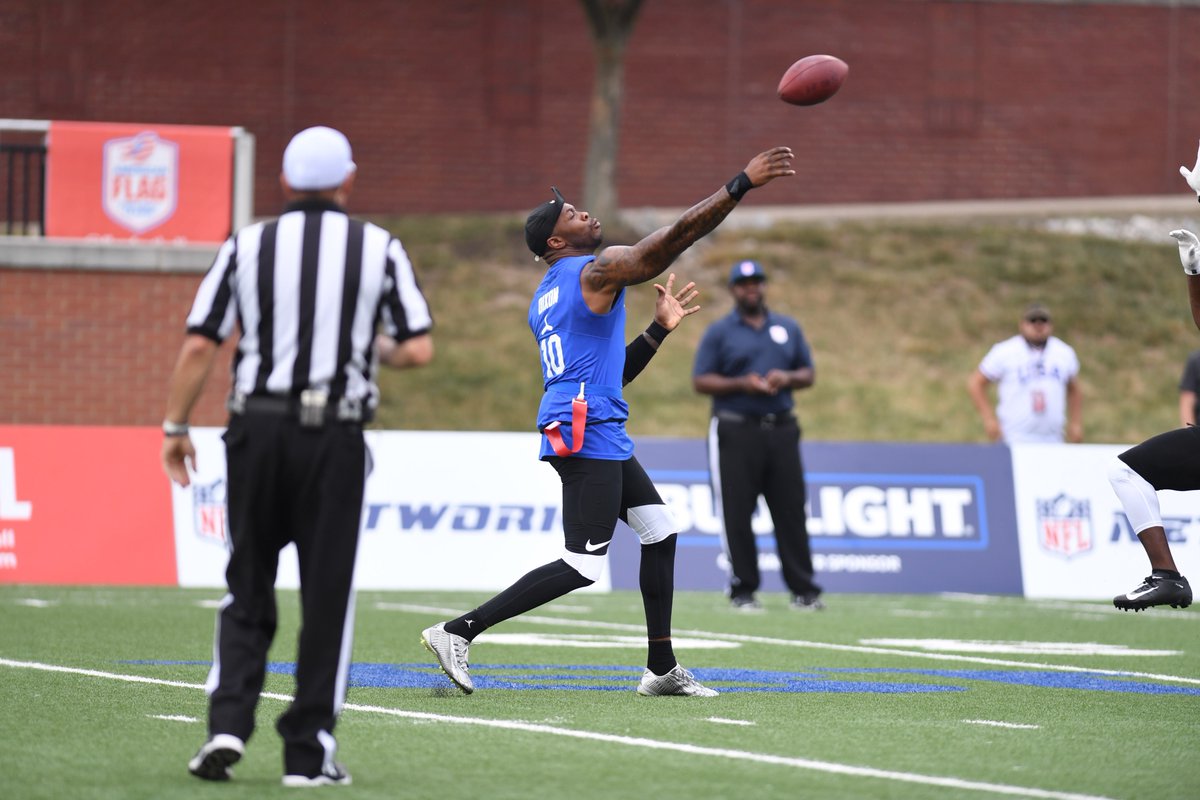 Here’s something I never thought I would write. Former Pittsburgh Steelers quarterbacks Jerrod Johnson and Dennis Dixon hooked up for a 64-yard catch-and-run yesterday during a contest for the American Flag Football League, whose games are being televised on the NFL Network.

Dixon, a former Heisman hopeful while with the Ducks in college, never quite made it in the NFL, though he got to start a few games. Yesterday, he caught a dump-off pass from Johnson and slipped between two defenders for a long gain, nearly a touchdown, only he stepped out of bounds. He would later score.

Led by @wallace_seneca‘s 315 yards and 4 TDs through the air, Godspeed is moving on to the @FlagFootball Ultimate Final.

I have previously talked about the AFFL and Johnson, whose team has previously beaten Michael Vick’s from the tournament. Now Johnson’s team was eliminated by Justin Forsett’s group, which is quarterbacked by Seneca Wallace.

I’m not going to lie and act like I actually watched the whole game, but I did see highlights, and I am actually glad that it’s something that exists. The rosters are surprisingly full of former NFL players, including some relatively prominent ones like Vick, Forsett, and Jason Avant.

To be more precise, the league is divided into two separate groups, with one bracket featuring former professional players and the other featuring amateurs or semi-pros. If you go to the website and look at their rosters, you can see that some players only had experience in football at the high school level.

Forsett’s team is the one that cleared the bracket on the professional team’s side, and they will be facing the amateur side known as Fighting Cancer. The two teams will face off in the ‘Ultimate Final’ on Thursday, the 19th.

You have to think that many of these players will also be looking to sign contracts with professional teams. Even if it is not with the NFL, the Alliance of American Football is going to be holding regional combines in August. The XFL will be reopening its doors for the 2020 season.

Somebody like Jahvid Best, who also participated in this flag football tournament, surely retains aspirations of returning to the NFL at some point. This at least continues to keep his name circulating, both within the league and in the public space, even if it is rather minor.

It wouldn’t at all be surprising if we see Wallace as the starting quarterback for one of the AAF’s teams come February. As far as flag football goes, he has actually looked very good. As an NFL player, he started 22 games, going 6-16, but his numbers weren’t awful. He played for some bad teams, including the Browns and pre-Russell Wilson Seattle.

Wallace completed 59.4 percent of his passes over the course of his career for 4947 yards, throwing 31 touchdown to 19 interceptions. He also rushed for 339 yards for another two touchdowns. With a quarterback rating north of 80, that’s not bad at all for a backup. But he is going to be turning 38 in less than a month, too.