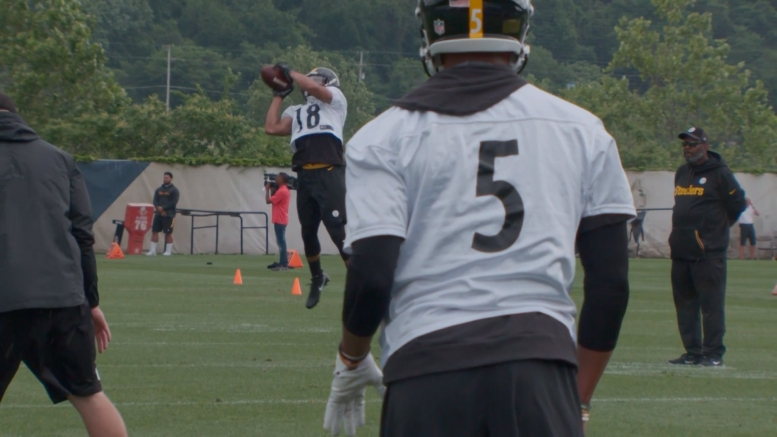 I’m not entirely sure why, the Pittsburgh Steelers Head Coach Mike Tomlin has over the years grown an affinity for wide receivers who were former college quarterbacks. Not that the team doesn’t have a very prominent history of success in that regard, not just with Hines Ward, but also with Antwaan Randle El. Ward of course was not a full-time quarterback. Heath Miller was originally intended to play quarterback at Virginia.

Of course we all are aware of the long-standing infatuation that Tomlin has had over former Ohio State quarterback Terrelle Pryor, who actually did—eventually—manage to transform himself into a capable wide receiver, even if he still has a lot to prove.

A couple of years back, Tomlin decided to really tinker with this idea, and he ended up rounding up two former college quarterbacks as undrafted free agents to stick at wide receiver in Devin Gardner and Tyler Murphy.

Gardner, if I recall correctly, would suffer an injury and be released, but Murphy actually spent time on the team that year. He was initially on the 53-man roster as a wide receiver and even caught a pass before being sent down to the practice squad. He was brought up later that season as an emergency quarterback but did not play.

Tomlin’s latest quarterback-turned-receiver is Justin Thomas, who came out of college last year with an open mind about the prospect of him having to move to another position. He ran drills at both cornerback and wide receiver, but he went unsigned until the Steelers called him in August and asked him if he wanted to come in and play receiver.

Thomas recalled to Chris Adamski that conversation he had with the head coach about the conversion. “’You can go into it having a (negative) mindset, or you can just flip your whole mind and be that much better’”, Adamski quoted Thomas as recalling from that chat.

“I am trying to go into that mindset: 100 percent receiver”, the receiver said. “That’s where I am at right now, that’s what my situation is, and I am trying to embrace it as much as possible”.

Thomas spent time on and off the practice squad last season even though he didn’t get a lot of work in training camp or playing time in the preseason, somewhat similar to their keeping C.J. Goodwin on the practice squad a couple of years ago.

Now he is back for more and taking on that ‘100 percent receiver’ mentality to make the most of whatever opportunity presents itself to him. He has been able to make some plays with the second and third units this spring, making connections with rookie Mason Rudolph.

There’s not a lot set in stone at wide receiver behind the top two spots right now, the rest of the depth chart filled out by names like Darrius Heyward-Bey, Justin Hunter, and Marcus Tucker, the latter being the other wide receiver from last year’s practice squad. Thomas may be behind even them, but if he has a great camp, who knows?