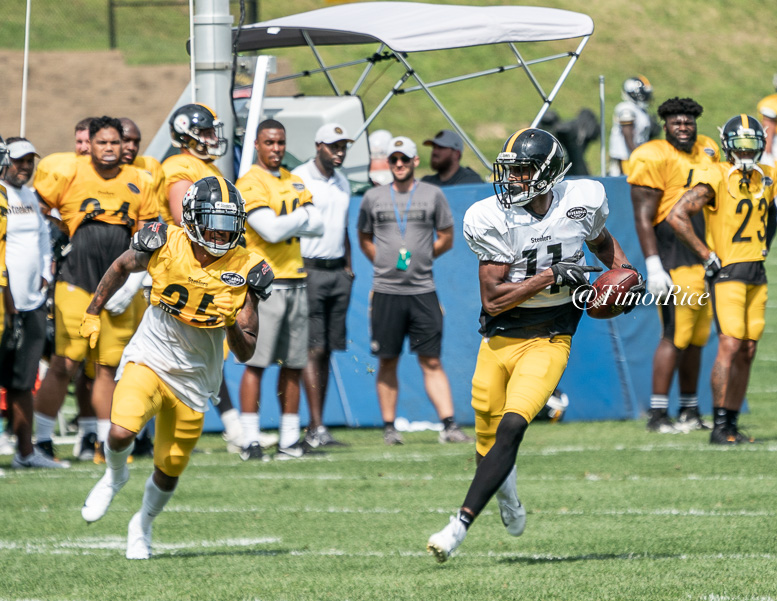 Justin Hunter has been a great football player in the offseason for a number of different teams as he heads into his sixth NFL season. The former second-round pick is hoping to do more of what he does in practices this year, only inside of stadiums, and so are the Pittsburgh Steelers.

Originally added in free agency last year on a veteran-minimum contract, Hunter was re-signed for a second year after catching four passes for 23 yards and one touchdown in seven games in 2017, spending most of the year as a healthy scratch.

6’4”, over 200 pounds, and with speed, he has long been a player known to do impressive things. Anyone so physically gifted will be able to utilize those gifts to varying degrees in practice settings. Doing so in games, when your performance becomes a lot less dependent upon your physical attributes, is another matter.

But Ramon Foster said back during the spring that Hunter was doing things in practice he wasn’t doing even last year with the team. Just before training camp, Head Coach Mike Tomlin voiced his support for and belief in the sixth-year wide receiver. Now quarterback Ben Roethlisberger has publicly joined ship.

“Justin is a guy who is going to have to step up for us”, he told reporters, saying that he did just that during the spring. Last year, “he came in trying to figure things out. I’m really excited for him to have another year under his belt to see what he can do”.

With the trade of Martavis Bryant back in April, there is a potential opening for a role of some kind. Antonio Brown and second-year JuJu Smith-Schuster figure to be the starters, while rookie James Washington is expected to be the number three, but Hunter is in position to battle for playing time.

While Eli Rogers is back, he is still recovering from a torn ACL suffered in the middle of January and is on the Physically Unable to Perform List. The ship seems to have sailed on the idea of Darrius Heyward-Bey being a meaningful offensive contributor. And Marcus Tucker is still looking to climb off the practice squad.

A number of teams over the years have tried to unlock Hunter’s potential, though in his defense, he has never worked with a quarterback as good as Roethlisberger, and Big Ben does seem to be a fan of his. He got a number of targets during his small amount of playing time last season, though many of them were on uncatchable deep passes.

One area in which the Steelers would love to see him help is in the red zone. He has the height and leaping ability to be effective in that area, and has looked the part during the offseason so far, though the same thing was said of him a year ago. And that’s long been the problem. Perhaps in his second go-around in Pittsburgh, he’ll be the solution.