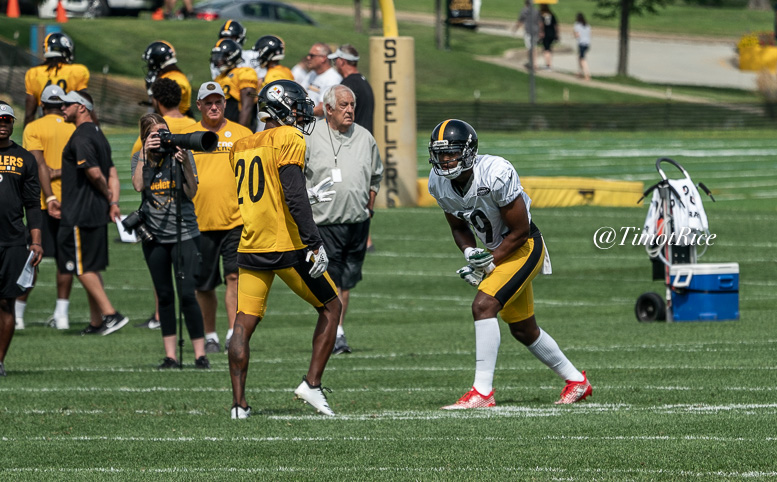 Question: What is your biggest takeaway so far from training camp up to the team’s first break day?

The Steelers are off today for the first time since training camp opened, so it figures to be a good time to pause and take stock of where we are. Yes, it’s very early and there aren’t any meaningful answers just yet, but it’s not like there’s anything else going on today.

Obviously the big story of training camp to date has been Ramon Foster’s injury. While he appears to have avoided a major scare, the veteran is expected to miss the preseason with the hopes of returning for the season opener.

In the meantime, the Steelers are going to get a long look at some of their depth, especially Matt Feiler and Larson Graham, the latter a rookie who has been elevated to second-team with B.J. Finney moving up to work with the starters.

One encouraging development has been positive signs from rookie first-round pick Terrell Edmunds, who recorded an interception during a scrimmage and had some success in coverage in one-on-one drills. Artie Burns has also had some positive reps, getting a pick of his own in scrimmage, and another against Antonio Brown in Seven Shots.

The inside linebacker battle has been interesting, with Jon Bostic slowly but surely being given more opportunities. The team is even pairing Bostic and Tyler Matakevich together, giving Vince Williams some reps off. They obviously want to get a lot of looks at both players.

James Conner and Jaylen Samuels have both showed positive traits in the passing game so far, an encouraging sign. That is going to be a big part of Samuels’ meal ticket for even making the team, but it’s very important for Conner as well.

Injuries unfortunately continue to be a theme with key players such as JuJu Smith-Schuster and Vance McDonald also being held out of the final practice, not to mention T.J. Watt. All three are important contributors who are either young or new to the team, so there is concern over how much practice time they will miss.