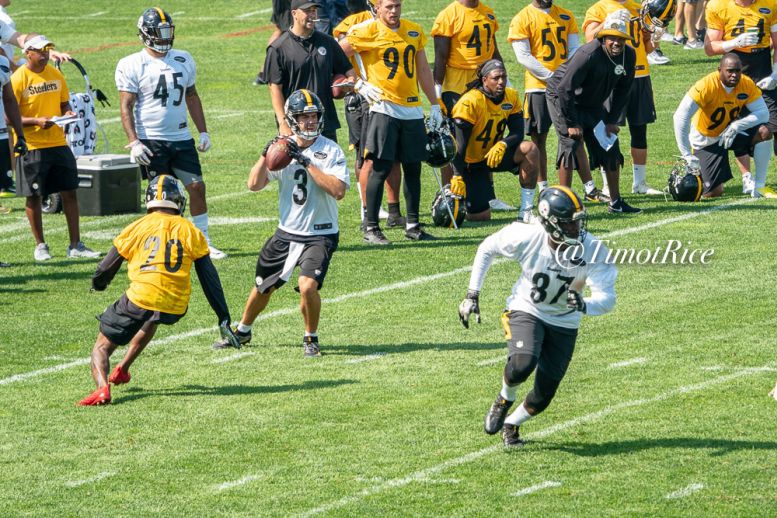 Up for Grabs: Dimeback

In some ways, this is a very similar discussion to the one that we had yesterday about the potential for an expanded nickel defense in terms of the variety of personnel used. But though I’m listing the same names, the likelihood is that Hilton will be the nickel and that the two competitors for playing time in the dime defense will be Cameron Sutton and Terrell Edmunds.

Sutton, entering his second season, has been running everywhere on the defense so far in training camp, though they have not yet installed the dime package. Perhaps that will come soon, or are they are waiting for Morgan Burnett to get back on the practice field.

Maybe I’m wrong, but it seems a little curious to me that we are three practices into training camp and the team has not yet begun to install the dime defense (multiple defensive players confirmed that they did not install it by the end of minicamp in the spring).

Sutton was actually used as a seventh defensive back at the end of the regular season a year ago. Earlier in the season, even he finally came off of injured reserve, he received some starting time as an outside cornerback. He figures to be the top backup at all three cornerback positions, but could also see playing time without injuries as a fourth cornerback on the field at the same time.

Or the Steelers could opt to use a third safety for that sixth defensive back, a package they called the quarters defense, and one they have used extensively in the past, particularly in 2013. Under that option, Edmunds would obviously be favored, though he might not necessarily play the ‘dimebacker’ role; he might just simply be the sixth defensive back on the field.

Alternatively, the Steelers could make use of both packages, something that they did in 2011 during Cortez Allen’s rookie season. Both he and safety Ryan Mundy saw time that season as a sixth defensive back, depending on the look that the defense wanted to show.