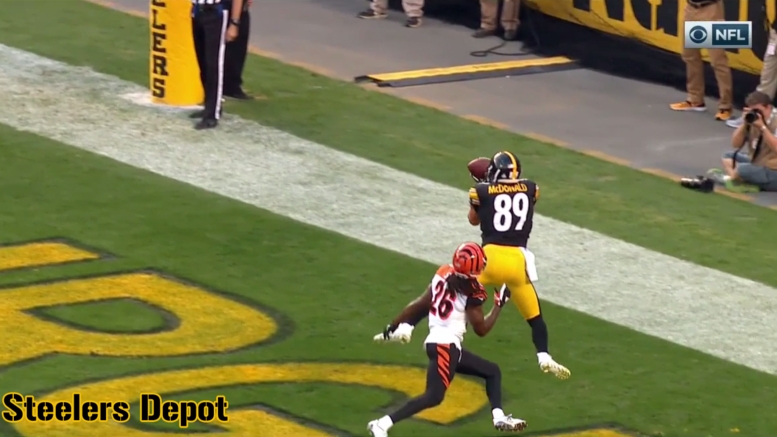 Vance McDonald: Such a huge year for him. The good news is everything will have slowed down compared to the chaos he endured last year, traded at the end of the preseason and thrown into the fire. This is his first training camp and he can absorb the offense at the same rate as everyone else, not take a crash course.

When healthy last season, we saw plenty of promise. A capable blocker, a vertical threat, someone who can make impact plays, even if you have to deal with a couple drops in the process. Health is the operative word we think of and he needs to show that during camp. Don’t need a bad hamstring injury getting his 2018 off to a rocky start. I wonder how the team will balance that concern with the need for reps; after all, he didn’t get much of those in practice last season.

But the talent is all there, I have no question about that. It’s just about showing consistency and proving he can be the seam threat the Steelers have lacked for a long time.

Jesse James: It’s fair to say James is a pretty maxed out player, even at barely 24 years old. That’s not a bad thing, it’s just reality. He’s a #2 tight end, a solid-enough blocker who showed the ability to make tough catches during the season after a rocky camp that compelled the team to acquire McDonald. He’s tough, high effort, I’m spouting all the grit-level cliches over here.

And I assume he’ll show the same at Latrobe. If he can make more plays downfield, perfect. If not, and I’m certainly banking on that, that’s fine too. Not going to be his role.

Xavier Grimble: I recently wrote about how important of a camp and season this is. For starters, he has to be someone who’s available. At times during the last two years, the heat has gotten to him and he’s missed practice. That’s not someone you’re going to trust to play through critical moments of the game. It’s not a work ethic issue, at least, I don’t think there’s one. Grimble seems to train as hard as anyone. No matter the reason, it’s an issue, and it’s gotta change in his third camp.

Beyond that, he has to be a consistent playmaker. Someone who flashes, someone who can bring something different to the table than James, a known, if boring, commodity. We’ve seen him do that before, even in the regular season, but now’s the time to put it all together. His blocking improved in camp last year and during games so that isn’t as primary a worry as it was a year ago.

Grimble can carve out a role in the NFL. But this is the year we’re going to find out if that’ll happen.

Pharoah McKever: An interesting UDFA from FIU, McKever has had quite the journey to the big leagues. A quarterback in high school school, he committed to NC State as a wide receiver before the school quickly moved him to defensive end. Then he switched to tight end after a couple of seasons, barely played, and transferred to FIU as a grad student.

He’s interesting because he does have experience out of a three-point stance, doing the dirty work in run blocking and a healthy amount of pass pro, a bonafide unicorn out of a college tight end. Thin-framed, he needs to add muscle and leverage is going to be a massive issue for him, a stand-up, stiff player who is probably going to get his butt whooped by the blocking sleds his first couple times in camp.

McKever can stretch the field a little bit and shows toughness and a willingness to attack the middle of the field, where all good tight ends earn their money. Although a #3 tight end on the Steelers roster doesn’t tend to have any unique special teams value, McKever played special teams at NC State and performed well there with his blend of size and wingspan. I’d love to see him on the field goal and punt block teams, manning the front lines and getting a paw up to bat down an attempt.

Can’t see him making a serious push for the 53 man roster, he’s just too raw, but he has the talent to redshirt a year on the practice squad.

Ryan Malleck: Malleck was Jake McGee’s replacement, the promising tight end who tore his Achilles during the spring. Malleck got a cup of coffee with the Steelers in 2017 but an injury got him cut in June. He’s returned and to be honest, I don’t know much about him. He has ok size and similarly ranked athleticism (4.81 40, 34.5 inch vert, 7.00 three cone coming out of the draft at 247 pounds) and I’ll leave any thoughts at that. Hopefully he can offer more than a typical end-of-roster tight end, the Scott Orndoff’s and Michael Egnew’s of the world, and that starts with being available, a good blocker, and not making mental mistakes.