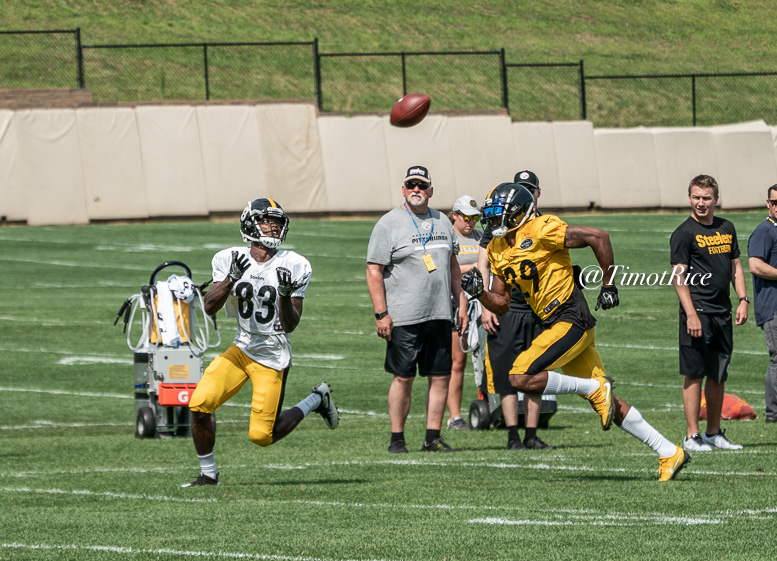 The final day of practice before the Pittsburgh Steelers receive their first off day. Here’s what to watch for.

– Big picture, you’re seeing what guys can get over the finish line. Guys who are still playing with proper technique, taking care of their bodies, not wearing down, not looking to Tuesday’s day of test. This is only the beginning of a long process, heck, there’s six straight practices after the off day. Especially for the young players, they need to bring the same intensity today as they did Day Three.

– It’ll be interesting to chart up how the team has divided up the QB reps each practice. Feels like they focus on three guys while the 4th either has the day off (Ben Roethlisberger) or limited reps (Landry Jones yesterday). Want to see a little more from Josh Dobbs. Haven’t been really excited about him so far and the pick he threw yesterday was ugly. Mason Rudolph, want to see that internal clock speed up a touch.

– Hoping the run game finds their footing more than it did yesterday, though the blocking did them no favors. Lot of tough runners among this group but looking for someone to be a home run threat. James Conner is showing juice and has had a very nice beginning of camp in all three areas.

Interesting to see Randy Fichtner expand the playbook and get two backs on the field. I think you’ll see some Pony formations in the regular season with Le’Veon Bell and/or James Conner/Jaylen Samuels. With Conner on the field, Bell will be split out. With Samuels, Bell will be in the backfield. Flexibility.

– Obviously, looking to see what’s up with Vance McDonald and his foot injury. Xavier Grimble perked up yesterday. Let’s hope it happens again. Pharoah McKever has a date with the blocking sled. Things didn’t go too well yesterday. Ryan Malleck has been pretty “meh” throughout. Hasn’t impressed in any one area.

– Rookie Damoun Patterson has made enough plays to begin to separate himself from the likes of Quadree Henderson, Trey Griffey, and Justin Thomas. We’ll also check on JuJu Smith-Schuster’s status for whatever unknown injury he’s dealing with. Appears to be minor, though Tomlin implied he may be held out tomorrow. With rain in the forecast, probably a good idea.

– Nice day for the unit yesterday. L.T. Walton, Casey Sayles, even a bit of Parker Cothren jumped out at me. Greg Gilmore worked over Parker Collins in one-on-one and I want to try to get a better look at Joshua Frazier, especially in OL/DL work.

– Gotta check the injuries to T.J. Watt and Ola Adeniyi. Watt’s hamstring with a wet field…I’d be surprised if he practices the next couple of days. Adeniyi could be in concussion protocol but I’m not 100% sure. Assuming both miss, more reps for Keion Adams and Farrington Huguenin, who definitely need the work.

– Weirdly unsettled yet impressive group. You can say good things about pretty much all these guys. Competition bringing out the best in all of them. Matthew Thomas has played better than I thought he would.

– Seeing the versatility from several of these guys. Cam Sutton has played all three spots and Dashaun Phillips is getting work inside and out. Phillips is someone worth keeping on the practice squad while on the veteran side of things, Coty Sensabaugh is doing everything he can to stick around and beat the odds. Still tough to see the path if they keep only 5 CBs. Might need to hold onto 6.

– I’m guessing Morgan Burnett will sit out tomorrow too with the off day looming. Maybe comes back for Wednesday. We’ll check in on Sean Davis’ status. But all that means is more time for the likes of Marcus Allen, Terrell Edmunds, and Malik Golden, who have impressed the last couple practices.