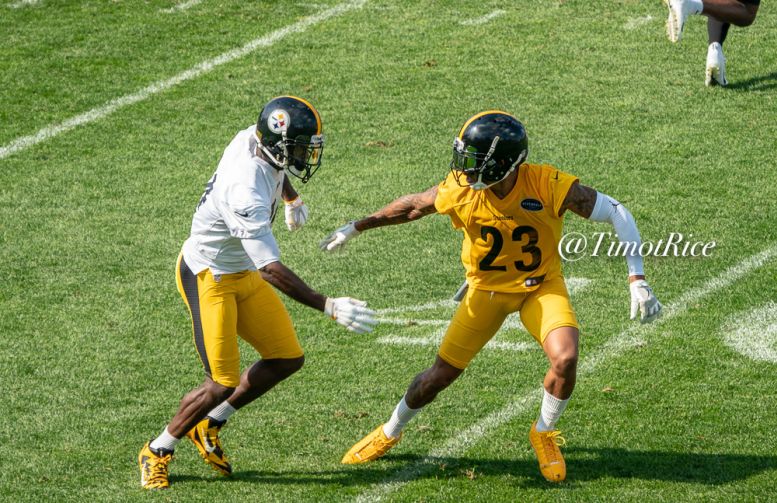 Well, we finally have some football in the books. It’s a small sample size, one practice while still in shorts, but hey, it’s a start. Day One, and honestly, today as well, is largely about getting familiar with where guys are lining up and working as opposed to how well they are or aren’t doing. Camps aren’t won or lost after day one. A little knowledge can be a dangerous thing and all that. But that’s what we’re working with so let’s dive into what to be on the lookout for Friday afternoon.

– I don’t have much here. It was interesting to see how few reps Mason Rudolph got. Felt like he was Bart Houston or John Parker Wilson. As we wrote yesterday, Rudolph didn’t check into team sessions until the 34th rep of practice and by my count, threw only four passes on the afternoon. Not many reps to impress or get better. I’m sure things will change when guys like Ben Roethlisberger and maybe even Landry Jones get days off but his reps are certainly something I want to keep a close track on. So far, it’s been table scraps.

– If you want to pick someone who “impressed” Thursday, it’d probably be James Conner. Does look a little leaner and I really liked the way he attacked the football as a receiver. Tomlin liked how he finished his runs. He’s the first stringer with Le’Veon Bell sitting out and expect him to be a bellcow in the preseason.

Jaylen Samuels lined up at running back, slot receiver, and outside receiver. You’re going to see plenty of that the rest of the way, including with the 1’s, like he did yesterday.

Have to feel for guys like James Summers and Jarvion Franklin, the 5th and 6th string running backs on the roster. Pretty buried right now until someone gets dinged up and they can climb the ladder. I think Franklin got all of one or two carries and hardly any more snaps than that.

Hoping Roosevelt Nix catches the ball a little bit cleaner too. Yesterday was a rough one.

Again, just interested in how OC Randy Fichtner is using the position and getting creative with these players in space. That revolves around Vance McDonald but we’ll see what he does with a guy like Xavier Grimble or Pharoah McKever, two guys who can make plays downfield. It’s not as much about how those guys are performing, though McDonald seemed to have a productive day, but how the position will be used. Like I’ve said a couple times already, think McDonald could be in for a big year.

We’ll see how much more time Marcus Tucker gets with the starters. He saw some work there in the slot in the latter half of yesterday’s practice. James Washington took a good first step even if it wasn’t a great day, with one ball wrestled away by Coty Sensabaugh and a couple of misfires on out-breaking routes. Obviously a critical name to watch.

Someone in the back of the pack has to separate themselves and get into that “top” group whenever there’s an injury. Whether that’s Damoun Patterson, Tevin Jones, Trey Griffey, someone’s gotta do it. Go grab that bag.

I’m going to try and spot Justin Thomas and Quadree Henderson getting work in team drills. I don’t remember seeing them out there very much, if at all. Don’t want to get labeled as pure returners, though that’s the biggest skillset they have going right now.

The only thing I noticed on the injury front yesterday was center Parker Collins getting carted off near the end of practice. We’ll see if there’s an update on his status, good or bad news. As I wrote in yesterday’s report, if he’s done, you’d think they will bring in another OL as soon as possible. But it’s hard to say how serious the injury was. It looked like they were working on his right knee but maybe he was cramping up or something, I’m not sure.

If Collins isn’t able to participate, Patrick Morris should stay up in the second-team center slot. More reps for him. That’s a good sign. Elsewhere, not a lot to learn yet until we get the big uglies in pads.

Cam Heyward and Stephon Tuitt caused an appropriate amount of havoc yesterday so that was good to see. We’ll try to keep a close eye on the backup nose tackle battles and if any of the rotational players begin to emerge, though we’re still a ways out from those things taking place. How many reps at nose tackle will L.T. Walton get? Or will the team put all their eggs into taking as long of a look as Daniel McCullers as possible?

We’ll see if Bud Dupree and T.J.Watt do any flipping in their now new spots. Not sure if that’s going to happen. Obviously, we all want to learn about Keion Adams but that’s going to be tough to do on Day Two, especially if there isn’t any one-on-one work like what happened Thursday. Farrington Huguenin made a little noise yesterday so we’ll see if he carries that over.

Fun group to watch. Tyler Matakevich dominated the starting reps but some have said Jon Bostic subbed in for nickel. I didn’t take note of that and still haven’t combed through my notes to try to line things up. But something to now watch for.

Matthew Thomas got a decent amount of reps running third team ILB. And it surprised me Darnell Leslie kicked inside. Thought he’d be an edge. Seemed to fly around a decent bit. Names to keep in the back of your mind. All that did though was bump back Keith Kelsey and Matt Galambos, who saw a few reps but only a few. Bad news for both of them.

Nice day for the secondary. Artie Burns with a pick, Joe Haden forced a couple incompletions, and Sensabaugh was feisty in run support and played good man coverage, sans for getting beat downfield by Washington once. Looking for all of them to keep it going.

Cam Sutton bounced around between second-team slot and third-team left corner. They’re going to put as much on his plate as they can handle. And we’ll see what we get from Brian Allen, working the second-team right cornerback spot.

I swear I saw Mike Hilton take one rep at safety at the end of practice. I’ll keep my eyes peeled and tinfoil hat on.

I’ll try to get a better feel for who is free/strong but it can be a little difficult to tell. Probably something better to check out in games. Marcus Allen seems buried, running 4th string on a team that only goes three deep. So that’s not a great start but hey, lot of time left to make an impact.