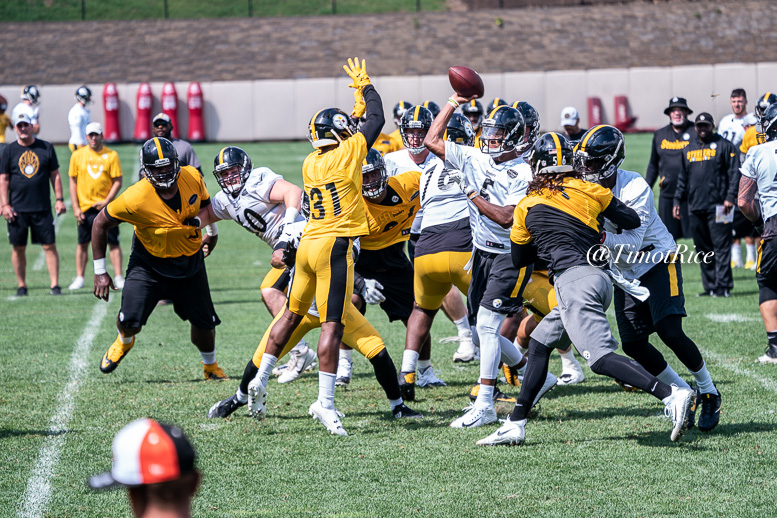 Today is a big day, Steelers Nation. Ditch the shorts, shells, and laughs. Put on the pads and a scowl. The Pittsburgh Steelers are hitting today.

Saturday marks the first day the team will be in pads and in full contact sessions. As intense as any day of camp. Here’s what to watch for.

– The good news, if you’re under center, you still can’t get hit. But now you know you could lead your receiver into trouble over the middle. Accuracy has to be perfect on short/intermediate crossing routes. An area Landry Jones and Josh Dobbs have struggled with during their careers. Mason Rudolph…we’ll see.

– Now you can start learning more about this group. But for starters, they’ll get to stare down some angry linebackers in the first backs on backers drill (the other will take place Friday Night Lights). Who is going to square up, hit with a solid punch, and slide their feet? Coaches love repeating this drill with the same guys in good battles. Competition level goes through the roof.

In drills, who will run with low pad level and the ability to finish runs? Who has the stamina to take a beating and keep on going in the fourth – maybe even 5th – team session. And who can get lucky and stay healthy? Today, for all positions, is where injuries start to mount up.

– Like running backs, the receivers know they can now get hit, even if teammates usually will pull up and not go for the killshot. Want to see toughness and willingness to go over the middle, especially for anyone in the slot (JuJu, Tevin Jones, Marcus Tucker, little bit of James Washington).

Should also get WR/DB one-on-ones. Makes for a busy day. WRs have the advantage. Corners have to play good technique, read the stem of the route, stay in-phase, and show strong hands at the catch point. They have it tougher but they’re also graded easier.

– More chances to check out Vance McDonald, who had an impressive first two days. Now, the stakes are raised. Let’s see the chemistry between he and Ben Roethlisberger. Looking for Xavier Grimble to make some noise. His start hasn’t been bad, I guess, but you would’ve hoped he flashed more with everyone in shorts.

– OL/DL should take place which is another intense, competitive session where we can learn more about these guys. Hard to evaluate them in team drills sometimes because there’s so much going on and they’re lumped in the middle. Chukwuma Okorafor, Parker Collins, Matt Feiler, all names to pay attention to. Rough day for the OTs yesterday too. Let’s see if they rebound.

– Cam Heyward and Stephon Tuitt are off to a nice start. They get some fun battles between Ramon Foster and David DeCastro. Haven’t seen much from Javon Hargrave, but again, can be hard to study those guys in the middle. Not that I’m worried about it.

Maybe, just maybe, Daniel McCullers is off to a good start? Kinda feels that way. A chance for some of the players struggling for snaps, Joshua Frazier, Greg Gilmore, Parker Cothren to try and make a move.

– Good day for them yesterday. They’ll be chomping at the bit in backs on ‘backers drills. Anthony Chickillo, Bud Dupree coming off good practices. So did Ola Adeniyi, a rookie whose leverage and strength could help him out a lot in 1 on 1 drills.

– Spotlight still on Tyler Matakevich and Jon Bostic. Battle definitely isn’t over yet. Yesterday, we saw a pretty heavy rotation across the board. Darnell Leslie’s been flying around the first two practices and winning as a pass rusher. L.J. Fort forced a fumble and had a good day.

– One-on-ones will be a treat. Artie Burns and/or Joe Haden against Antonio Brown and/or JuJu Smith-Schuster. Who can match Justin Hunter downfield? Again, these drills are designed for the offense to win. What defender can tilt the odds in his favor? Let’s see if the new guy, Malik Reaves jumps into team drills too.

– Obviously, looking to see what Morgan Burnett’s status is. Been a relatively quiet start for Terrell Edmunds. Maybe that changes tomorrow. And buckle those chinstraps. Jordan Dangerfield, Nat Berhe, Marcus Allen...some heavy hitters in this lineup.