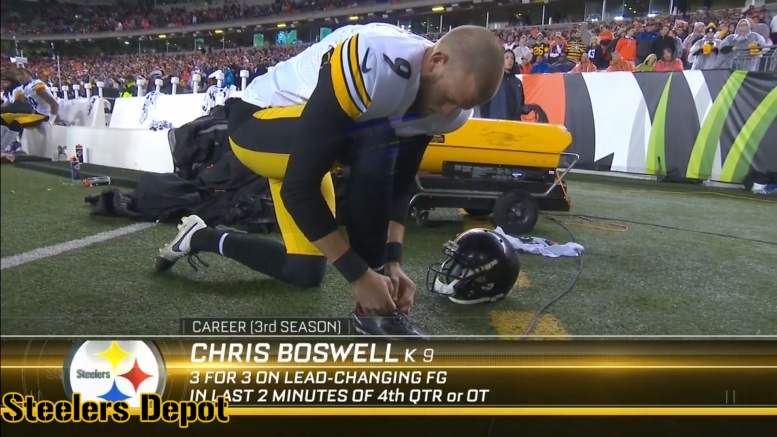 Question: Will the Steelers ask Chris Boswell to attempt more field goals from 50 yards out or more?

The Steelers have had solid kickers with average legs for years and years. The most notable recent examples of Shaun Suisham and Jeff Reed perfectly exemplify that. While they were consistent to very consistent performers inside the 32/33-yard line, going beyond that caused them enough problems that the team shied away from giving them many attempts from beyond that range.

Chris Boswell seems to be breaking that mold after he successfully made four field goals from beyond 50 yards on four attempts last season. That was tied for the second-most 50-yard field goals attempted in a single season in team history. Gary Anderson attempted six in 1991, but only made one of them. The four makes are also twice as many in a single season as any other kicker in team history.

There are only seven seasons in the past in which a Steelers kicker has made at least two field goals from beyond 50 yards, and Boswell owns two of those, having also connected on two in 2015 as a first-year player. He has six successful field goals from 50 yards or beyond in just three seasons, which is third-most in team history behind the eight of Anderson and Reed, who attempted 27 and 17 from that range, respectively. Boswell has eight attempts, connecting on 75 percent of them.

One miss was a rushed 55-yard attempt just before halftime in 2016. The other was a 54-yard attempt the same year. And it is worth noting that his career-long field goal is 53 yards, which he made last season.

During the season last year, as Boswell began making longer field goals, Mike Tomlin said that the team had been challenging him, looking to test and extend his range. It has now become the norm for many teams to regularly attempt field goals from beyond 50 yards. Will the Steelers become a part of that?