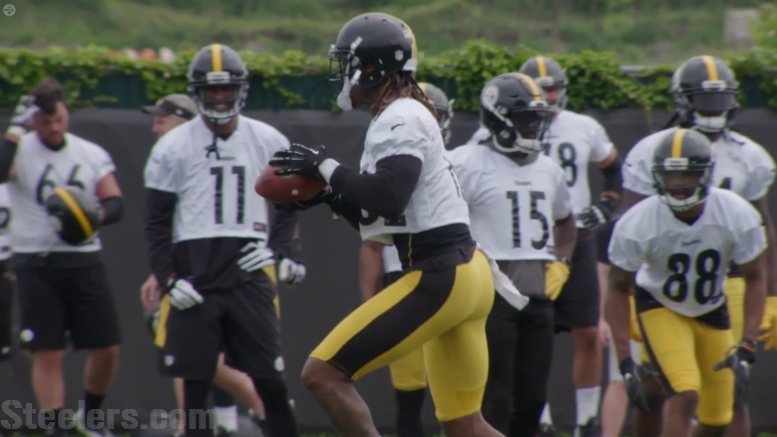 Question: How many wide receivers will the Steelers keep on the 53-man roster in 2018?

While the Steelers have carried as few as four wide receivers before, I think we can speak with reasonable assurance that they will bring at least five this year, based on how much the offense depends upon the passing game as well as the current talent available, as well as a lack of too many pressing needs at other positions.

Yet they have carries six wide receivers a couple of times in recent years as well, including as recently as in 2017, and they have returned four of the six receivers from that group. They replaced one with a second-round pick, and the other one they may well still re-sign.

Antonio Brown, JuJu Smith-Schuster, and James Washington are the obvious locks. Justin Hunter and Darrius Heyward-Bey were on the team a year ago, while Marcus Tucker was on the practice squad all season and is a player the coaching staff seems to expect and look for upward ascension.

I don’t think a lot of the others have too great of a shot of making the roster, but you never know. Damous Patterson or Quadree Henderson are options that at least would be able to contribute on special teams to give themselves a shot.

Then there is the possibility of Eli Rogers being re-signed. He is a player that the team has liked since his rookie year, carrying him on injured reserve even though he was a college free agent who was injured before even playing in a preseason game.

He’s been on the roster for two years now and was playing a fairly sizable role in the playoff loss to the Jaguars. He has previously expressed belief that the team still intends to re-sign him once he is recovered from his torn ACL.