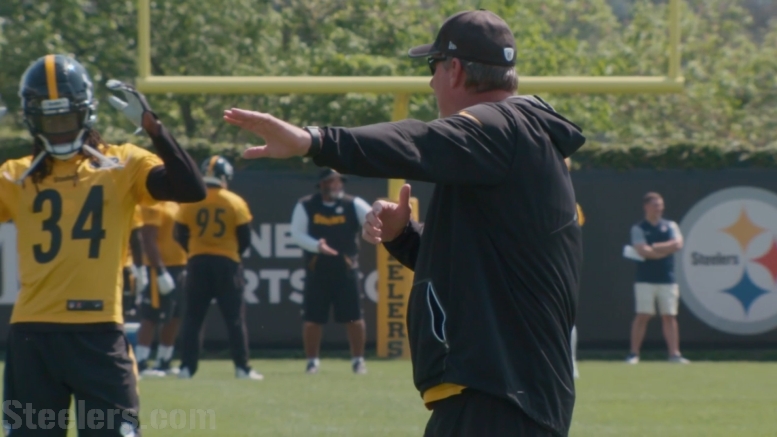 There is no one thing that Pittsburgh Steelers fans are hoping to see more of out of their team in 2018 than better tackling. The defense has been on a downward slide for the better part of a decade now in terms of tackling efficiency, having now gone from being one of the best in the league to one of the very worst.

The Steelers are quite aware of this fact, and both defensive coordinator Keith Butler and new defensive backs coach Tom Bradley talked about the need to work on their players’ tackling skills in order to improve the defense as a whole.

“We gotta stop the freakin’ run. I mean it’s as simple as you can get”, Butler told reporters yesterday as minicamp opened. “If you look at the whole last year, we missed a ton of tackles. Number one, we gotta tackle. We’re gonna work on tackling in training camp, try to improve it as much as we can, and if we are able to tackle better, all that stuff is gonna be cut down”.

Some of the biggest offenders in terms of missing tackles were strong safety Sean Davis and inside linebacker Ryan Shazier. Shazier will be replaced for the 2018 season as he continues to rehabilitate from a severe spinal injury, but we have provided context to his missed tackles before. Davis, Stephon Tuitt, and others, however, have really hurt the team in this department.

One of the reasons, Butler suggests, that the defense has struggled in tackling more in recent years than in the past is because they have become more reliant upon getting their young players—such as Davis—on the field right away.

Heading into the 2018 season, the Steelers will have five ‘starters’ on defense who have two or fewer years of accrued NFL experience, namely Davis, Artie Burns, Mike Hilton, T.J. Watt, and Javon Hargrave. They have played a lot of snaps already to date, even while they still have a lot to learn on a fundamental level.

To that end, the Steelers have hired two new position coaches on the defensive side of the ball in defensive line coach Karl Dunbar and the aforementioned Tom Bradley with the defensive backs. Bradley in particular is expected to make a big difference in that regard, but I will have more on that a bit later in the day.