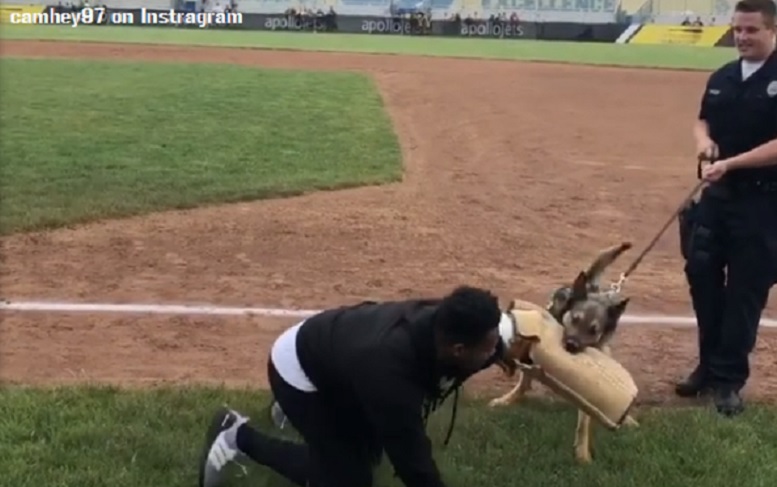 Pittsburgh Steelers quarterback Ben Roethlisberger held a charity softball game at Findlay High School on Sunday and several of his current and past teammates participated in it as you can tell by the tweet below from Joe Nugent of WTVG-TV in Toledo, OH. It is estimated that 2,000 fans were in attendance.

At one point on Sunday, Steelers wide receiver JuJu Smith-Schuster allowed a police dog to attack him, as you can see by the video that defensive end Cameron Heyward posted on his Instagram account. That exhibition was obviously done to promote one of Roethlisberger’s causes dear to his heart. Proceeds from the softball game will benefit Findlay High athletics and the Ben Roethlisberger Foundation, which over the last several years has made numerous contributions to both K-9 and service dog units for police and fire departments throughout the U.S. as well as the Make-A-Wish Foundation.

Ben Roethlisberger hits a home run in the HR derby to centerfield. pic.twitter.com/tldhqTee85

Roethlisberger is a graduate of Findlay High School.

It is unknown if Smith-Schuster was healthy enough to participate in the softball game, however (UPDATE: He played). The Steelers second-year wide receiver reportedly missed a lot of OTA practices the last three weeks due to an undisclosed injury.

The Steelers 2018 mandatory minicamp will get underway in a few days.