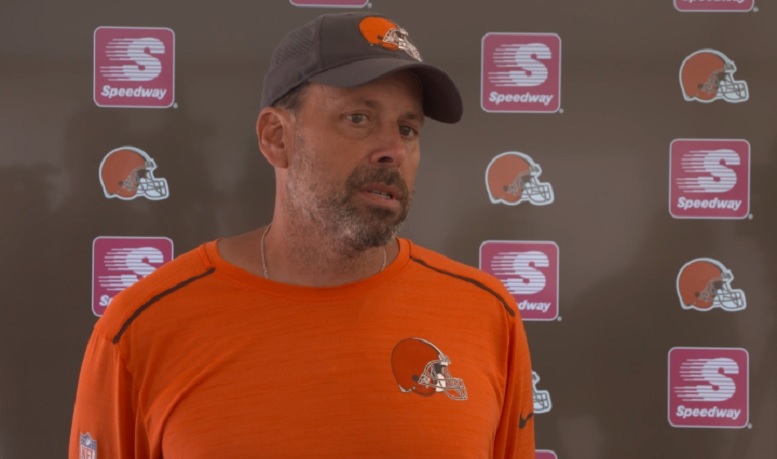 Cleveland Brown offensive coordinator Todd Haley met the team’s local media on Thursday and during his long session he certainly let loose with a comment that was hard for those in attendance or listening online to ignore.

“What I will say is probably in my career, this is one of the best – if not the best – quarterbacks rooms, in general, that I’ve had,” Haley said Thursday as the Browns wrapped up their offseason workouts.

Hyperbole, ignorance, just a shot at his former team, or all of the above? It’s hard to say for sure but when you consider that the quarterbacks currently on the Browns roster are Tyrod Taylor, Drew Stanton, Baker Mayfield and Brogan Roback, it’s hard to image that group making the room the best Haley has ever had during his long NFL coaching career.

Below is a question Haley was asked about the quarterback room along with his answer:

When you talk about the quarterback room and the strength of it, how much of that tone is set by the leader, in this case it would be Taylor?

Haley was later asked to clarify his strong quarterback room statement because of the fact he has coached at least one Hall of Famer and possibly a future Hall of Famer.

So do you mean more so from a working together standpoint than from a talent standpoint, or what do you mean?

“A little bit of both, but when I talk about the room, I talk about the makeup of the group,” Haley said. “There’s so many variables and things in football where you’re together every single day for so many months in a row that the makeup of the room, each room, is very, very critical. And there’s a balance in most rooms of veterans and young guys and when you have strong leadership in a group, it’s usually a good sign for everybody involved.”

It’s obvious that Haley and Roethlisberger didn’t have a great relationship while the two were together in Pittsburgh but does that really surprise anyone? Haley has had a history of rubbing quarterbacks he’s coached over the years the wrong way. Would Haley still be the Steelers offensive coordinator had his relationship with Roethlisberger been better? Perhaps.

Does Haley still harbor ill-feelings for Roethlisberger and the Steelers organization as a result of how his time in Pittsburgh ultimately came to an end? Perhaps.

Look, I get the fact that Haley should be spewing positives about the group of quarterbacks he’s now helping oversee now that he’s in Cleveland, but with that said, I can only imagine the amount of jaws of media members that dropped on Thursday when he called his current room of quarterbacks perhaps the best he’s ever had. Nobody believes him.

“It’s an exciting room to be a part of,” Haley added on Thursday.

Haley and the Browns will host the Steelers in Week 1 of the 2018 season.