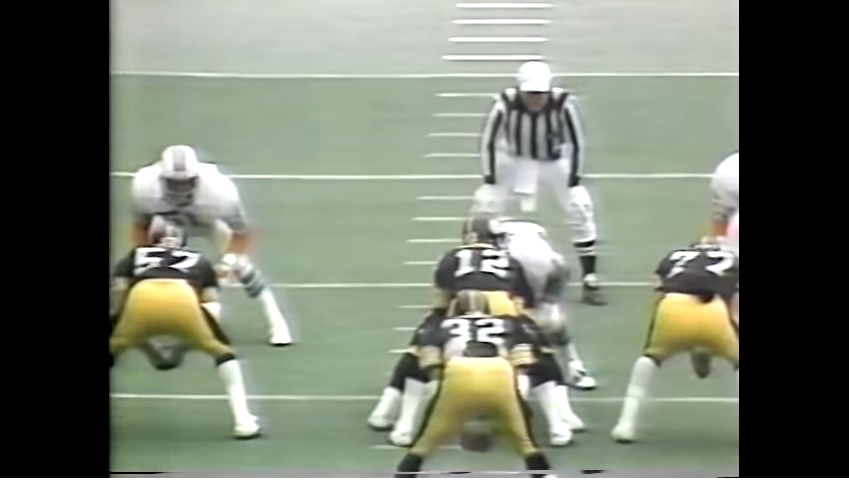 The first two of these we’ve written this offseason focused on the not-too-distant pass, the late 90s, early 2000s. I wanted to get back a step further for the elder Steelers’ fans and find some plays that I didn’t even know existed until I came across it.

It’s 1979, the Steelers looking to win back-to-back Super Bowls and complete their dynasty. The window is beginning to shrink, even without looking back at how things dwindled away as the 80s arrived. Terry Bradshaw was 31, Joe Greene plagued by the nerve injury in his shoulder, and Rocky Bleier/Mel Blount nearing the end of their careers.

For the December 20th Divisional Game, the Steelers hosted the Don Shula led Miami Dolphins. Pittsburgh struck first with a Sidney Thornton 1 yard touchdown run but by the end of the first quarter, they closed out the game with the two plays we’re going to talk about today. A pair of touchdown passes to John Stallworth and Lynn Swann, from Bradshaw’s arm, both incredible plays for different reasons.

The first connection. At Miami’s 17, Bradshaw dropped back, looking to his first read on the right. He pump faked, came back to his left and found Stallworth running across the middle. It was double coverage but it was also John Stallworth and the future Hall of Famer boxed out the defensive back to make the catch. From there, he went into Hulk Mode, shedding defenders like practice dummies.

Count ’em up, that’s FOUR missed tackles and a tip-toe along the sidelines and over the goal line. Pittsburgh went up 13-0.

The next drive, Bradshaw worked his magic. Miami’s #75 – much less impressive than Pittsburgh’s – Doug Betters came around on a twist and had Bradshaw dead-to-rights up the middle, right guard Steve Courson not passing it off correctly.

Bradshaw, somehow, pump faked, got Betters in the air, and ducked under him all in one move. He climbed the pocket, kept his eyes downfield, and found Swann wide open in the right corner of the end zone.

Touchdown, a 20-zip lead, and though Bradshaw came off the sideline with a limp, the game was essentially decided. Bleier and Franco Harris added second half rushing TDs to salt the game away and advance to the AFC Title game, beating Houston and then the Rams in the Super Bowl, topping off the dynasty.

As physical as the Steel Curtain was, there was no shortage of toughness and tenacity offensively either. Miami learned that the hard way.