Happy Friday to yinz and welcome to the weekend.

We are now five weeks away from the start of Pittsburgh Steelers training camp and hopefully this waiting time will fly off the calendar quickly. In the meantime, however, we will continue with our annual attempt at keeping yinz entertained. I have a few more series in mind to possibly do once I get done with contextualizing all the pass attempts in 2017 by quarterback Mason Rudolph.

We plan on rolling out a new site option in the next week or so and I think it will be one several of yinz will want to take advantage of. It should definitely be ready and rolled out by the time Steelers training camp gets underway.

As usual, I have a fairly quiet weekend planned but do intend on finally visiting the Clark County Museum on Saturday. We have lived in Las Vegas for just over two years now and I have been meaning to go visit that local facility in an attempt to learn more about the history of the city as well as all of southern Nevada. We also might venture down to Fremont Street Saturday night being as it’s been quite a while since we have done so. The only thing bad about that is that I am not a big fan of large crowds.

As usual, I have five questions for yinz to answer on this fine June Friday night and I want to see the comment section busy.

Have a great and safe weekend and peace and love to all.

1 – By this same time next year, will Steelers quarterback Ben Roethlisberger have signed a new contract extension?

2 – Monday night, Wide receiver Antonio Brown and running back Le’Veon Bell will both be in the final 10 of NFL Network’s top 100 players of 2018 along with Tom Brady, Drew Brees, Aaron Rodgers, Carson Wentz, Aaron Donald, Todd Gurley, Julio Jones, and Von Miller. Where will Brown and Bell each be ranked in the top 10?

3 – Which of these buzzworthy young Steelers offensive players are you most-excited to learn more about during training camp and the preseason?

4 – Do you expect 2018 to be the final season with the Steelers for guard Ramon Foster?

5 – Will Steelers running back Jaylen Samuels exceed 100 yards in both rushing and receiving during his rookie season?

Question 1 – Not only do we have fond memories of Ben’s rookie season; we loved the dominate defense and running game of that 2004 Steelers team. We noted back-to-back regular season victories against the undefeated Philadelphia Eagles and the undefeated New England Patriots as noteworthy (both played in the Super Bowl that year). Most saw Ben as a game manager that first year but also recognized that he might be a franchise quarterback. Folks noted his poise and ability to extend plays by sensing pressure, enough mobility to roll out and his excellent accuracy for a rookie. For the record, Ben completed 196 of 295 pass attempts for 2621 yards: A career low 187.2 passing yards per game. He had 17 touchdown passes versus 11 interceptions and tacked on a rushing touchdown. The Pro Football Reference credits rookie Ben with four 4th quarter comeback victories (led a 4th quarter offensive scoring drive with the team trailing by one score that they ended up winning or tied). He is also credited with five game winning drives (led a 4th quarter or overtime offensive scoring drive that put the team ahead for the last time.)

Question 3 – 54% believe that Eli Rogers is not a “slam dunk” to make the 53-man roster even if he is re-signed prior to the start of training camp. However, most do believe that he has a good shot if his knee is healthy enough. Many see other up and coming wide receivers like Marcus Tucker ready to step in.

Question 5 – Collectively, we named 24 of 32 NFL teams that we believe will win at least 10 games in the 2018 regular season. Here is a table showing how we see each division this coming season. The least competitive divisions appear to be the AFC East & North. 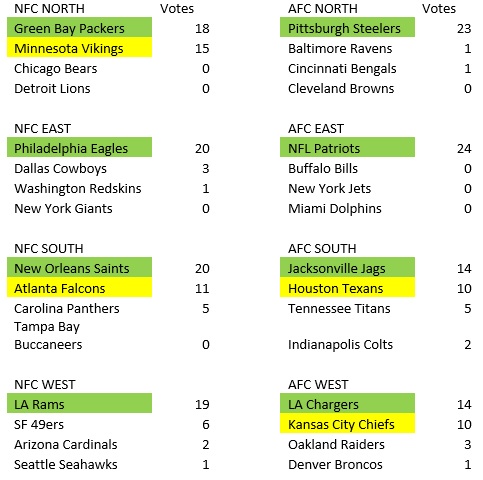 Looks like we are predicting the Packers, Eagles, Saints & Rans to win their divisions in the NFC with Vikings & Falcons as the wildcards. In the AFC, we have the Steelers, Patriots, Jags & Chargers as division winners and Texans & Chiefs as wildcards.