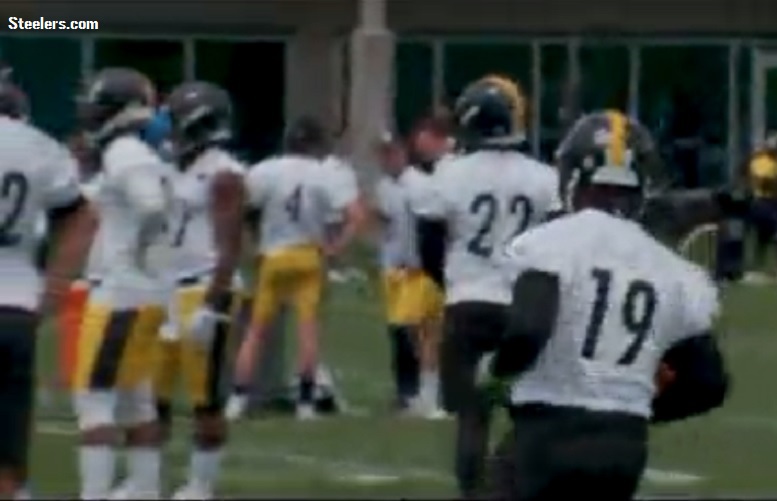 After allegedly missing all of the team’s 2018 OTA practices due to an undisclosed injury, Pittsburgh Steelers wide receiver JuJu Smith-Schuster was back practicing in some capacity on Tuesday during the first day of mandatory minicamp. Even so, the team’s second-round draft pick last year out of USC is apparently not yet fully healthy, according to comments he made to the media on Wednesday. He does, however, believe he’ll be a full-go late next month when training camp gets underway in Latrobe.

“For sure, especially with this five-week break,” Smith-Schuster said Wednesday afternoon, according to the Pittsburgh Post-Gazette. “I’ll be ready.”

So what is ailing Smith-Schuster these last several weeks? Apparently his left knee, but he wouldn’t reveal on Wednesday if the injury was serious enough to require surgery this offseason, only that it “developed over time.”

“It’s just something that has been bothering me over time,” Smith-Schuster said. “It kind of adds up. It just let me know I should get it checked out. I got it checked out.”

As a rookie and the league’s youngest player in 2017, Smith-Schuster went on to register 58 receptions for 917 receiving yards and seven receiving touchdowns during the regular season and also added a 96-yard kick return for a touchdown during the finale. His 917 receiving yards ended up being the most by a Steelers rookie in team history, breaking a very old record set by Jimmy Orr in 1958. If that’s not enough, he now owns the franchise’s record for the longest touchdown reception thanks to his 97-yard scoring catch against the Detroit Lions in Week 8 of the 2017 regular season.

Smith-Schuster’s great rookie season also included him missing two regular season games due to an injury and a suspension. In short, his sophomore season could end with him easily exceeding the 70-catch mark and registering way more than 1,000 yards receiving.

While Smith-Schuster is sure to see some playing time in 2018 lined up on the outside as part of personnel groupings that only require two wide receivers on the field, when the Steelers use three or more wide receivers, he’s sure to be lined up predominately inside and it sounds like he’s fully on board with playing even more in the slot like he did during his rookie season.

“I like playing inside and out, but I love the [physicality] of being in the box with the bigger guys,” he said. “That’s something that’s part of my game.”

If there has been any real knock on Smith-Schuster since he was drafted it’s that he’s missed some practice and playing time due to several minor injuries. Last year during training camp and the preseason he missed valuable practice time and game snaps while sidelined with injuries and a hamstring problem ultimately forced him to miss one regular season game.

After the Steelers break mandatory minicamp on Thursday, Smith-Schuster will then have the next six weeks off and hopefully he’ll be ready to hit the ground running when training camp gets underway at Saint Vincent College.