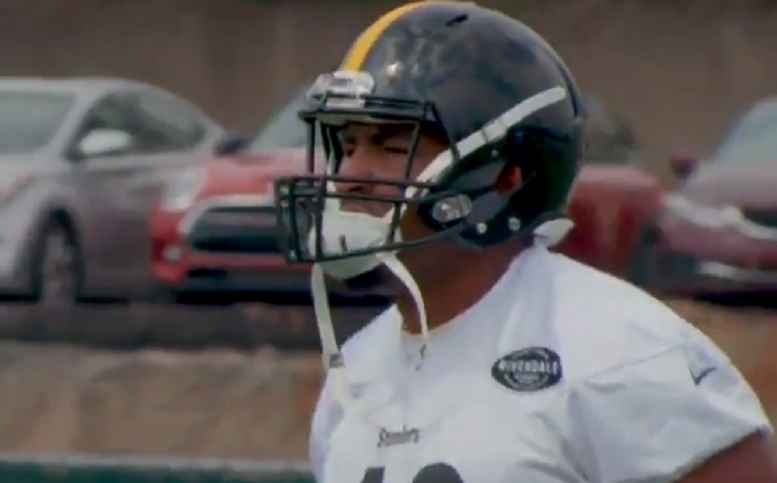 As you can probably imagine, the transition that Pittsburgh Steelers tight end Christian Scotland-Williamson is currently making from rugby to American football certainly isn’t an easy one. After the Steelers final OTA practice of 2018 on Thursday, the 6-9, 274-pound Scotland-Williamson, who was assigned to the team in early May as part of the International Player Pathway program, talked about the challenges he faces in making the transition from professional rugby to the NFL, with the main thing being the differences in the pace of the games, during an interview on Steelers Nation Radio.

“I think that what’s been the biggest challenge is the depth of the playbook and then having an instant recall at the top of your brain to go into a huddle, process the call, understand the snap count, line up and then go and execute at pace,” Scotland-Williamson said. “So, because rugby is a continuous game, you can’t script it too much, so you rely on your instincts and you play what you see in front of you. Whereas this, if you can’t line up, you can’t play, plain and simple.”

With Scotland-Williamson already a proven and top professional rugby player overseas, one must wonder why he would leave that to make it in America playing a sport he’s never played before. He answered a question related to that topic on Thursday.

“So, I was playing really well this season, getting some good write ups in the press, really making some headway with my career, and then someone plants a seed, kind of insets a seed of, ‘Oh, there’s a pathway for you to go and play in the NFL. Go on try your hand at the NFL and see if you can make the grade after a year practicing.’ So, I’m one of those people who can’t live with regrets, so I don’t want to be that guy in a bar when I’m 50, 60 years old telling my grandchildren, ‘Oh, what could have been. But didn’t happen.’ So, I think you’ll always regret the things you don’t do,” Scotland-Williamson said.

Scotland-Williamson also admitted that trying to sell his father on the idea of giving up professional rugby for a shot at the NFL was indeed a tough sell.

“He didn’t understand why I’d leave something that was finally going so well for me and I was really on the up and then drop everything to go into rookie camp with Pittsburgh Steelers,” explained Scotland-Williamson. “How many people can say that?”

In addition to getting used to football not being a game that includes continuous play, Scotland-Williamson also admitted that he’s having to learn and adjust to other differences such as tracking the ball in flight, looking the football in and sometimes catching over his shoulder.

“With rugby, everything you catch is in front of you because you can only pass backwards. So, in terms of skill and skill development from the transition from rugby to football, it’s getting used to tracking the ball over your shoulder, because in rugby you’re never in those situations because everything’s in front of you, everything’s kind of in a radius that you can see and so you can track the ball easily,” Scotland-Williamson said.

“And the ball’s a lot smaller, actually. So, with rugby, when you catch the ball you almost catch the middle of the ball because you’re then going to have to pass the ball. You also don’t really look the ball in because you have to scan to see who is trying to hit you and then pick defenders off. But where in American football, once you’ve thrown the pass, there’s an A to B. There is no real C. So, you look the ball in and then you just hold onto the ball for dear life. Whereas in rugby there’s an A, a B, a C, a D, and an E, so you’ve always got to have your head up and looking for other options. So, it’s about having the eye discipline to watch the ball all the way, likewise, track it all the way over your shoulder.”

So, why did he choose the tight end position?

“I think with my body size I provide a decent matchup problem as well,” said Scotland-Williamson, who later admitted he fully understands he’s in the infancy of his understanding of the game and the position he’s attempting to play. “It’s just about learning the position, understanding the playbook and then being able to execute at speed and not have to have that pause in your recall because that stops you from playing fast.”

To learn faster and thus play faster, Scotland-Williamson admitted Thursday to picking the brains of the other tight ends on the Steelers roster and mainly Vance McDonald and Jesse James and his reasons for doing so are obvious.

“I think where I’m missing those kinds of 10,000 hours on the field, it’s about up-scaling myself as quickly as possible,” Scotland-Williamson said. “So, any small information I can get in just increasing my football IQ because you can study the X’s and O’s as much as you want, but as soon as you get into a live situation when bullets are flying, you may have to react differently to something that’s just on paper. So, it’s about trying to develop those football instincts as quickly as possible.”

With OTAs now over with, next on tap for Scotland-Williamson will be the Steelers mandatory minicamp and that will of course will be followed six weeks later by the start of training camp in Latrobe. So far, the former rugby player has no regrets when it comes to him chasing his dream of playing in the NFL.

“It’s been really easy to fall in love with the game of American football, which it’s obviously a pleasant experience because you hate it if you flew all the way over here and then you got here, and you think, ‘Oh God, what have I done?’ There’s been no moment in this whole process where I’ve looked back and regretted my decision at all,” he said.

Assuming he stays healthy the remainder of the offseason, Scotland-Williamson should be on the Steelers practice squad as an 11th player. He won’t however, be eligible to be activated during the regular season and thus the 2018 season will most definitely be an instructional one for him and one he hopes might lead to a spot on the Steelers 53-man roster in 2019.

Welcome to the NFL ??@1CSW being put the through the paces at @steelers OTA ?