Which NFL player will ultimately win the annual MVP award in 2018? We won’t know the answer to that question until early in 2019 but according to the recent odds released by Bovada, Green Bay Packers quarterback Aaron Rodgers is the early favorite at 13/2.

As for the current odds for Pittsburgh Steelers quarterback Ben Roethlisberger ultimately being named the MVP of the NFL for 2018, Bovada has him listed at 25/1 and in total, there are 12 other players, all quarterbacks, with lower odds than him. In order, those quarterbacks are Rodgers, Tom Brady, Carson Wentz, Drew Brees, Russell Wilson, Cam Newton, Deshaun Watson, Jimmy Garoppolo, Matt Ryan, Jared Goff, Kirk Cousins, and Philip Rivers.

A little more than a year ago, Roethlisberger was listed as 12/1 odds to win the 2017 NFL MVP award.

Steelers wide receiver Antonio Brown leads the way as the favorite from his particular position with 50/1 odds. It’s worth noting, however, that no wide receiver has ever won the NFL MVP award.

The last and lone Steelers player to be named NFL MVP was quarterback Terry Bradshaw in 1978.

This past February Brady was named the NFL’s MVP for the 2017 season and it marked the third time he has won the award. 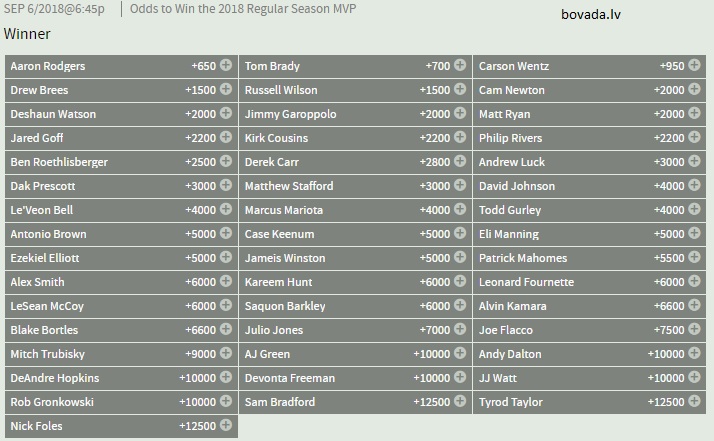