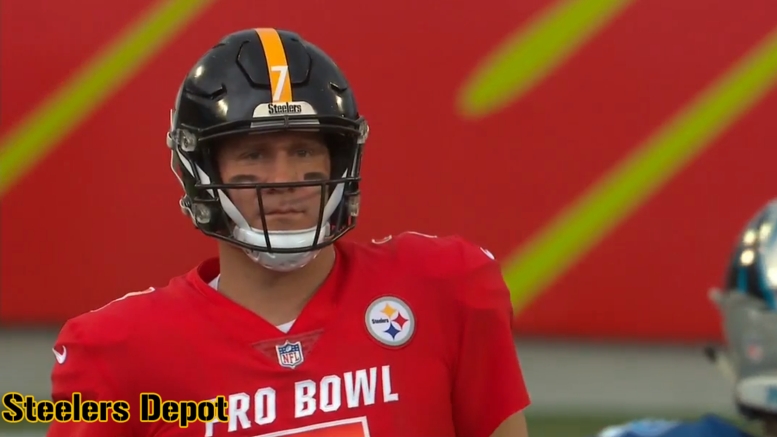 For the third straight year, we’re continuing the Ranking the Rooms: AFC North series here at Steelers Depot. This summer, we’re starting off with the quarterback’s room in the AFC North.

I’ll personally run down each position, starting with QBs, and ending with Specialists in the 10-part series.

Without further ado, let’s jump into the 2018 version of Ranking the Rooms: AFC North QBS.

Was there ever really any doubt with the Pittsburgh Steelers, with Ben Roethlisberger, Landry Jones, Mason Rudolph, and Joshua Dobbs coming out on top in this ranking?

Roethlisberger is still one of the best quarterbacks in the National Football League, let alone the AFC North, and could continue to play at a high level for the next 2-3 years. He has a ton of weapons around him, a great offensive line in front of him, and an offense that plays perfectly to his strengths.

Jones has proven to be a capable backup quarterback in the NFL, while Rudolph looks to be the heir apparent to Roethlisberger whenever the legendary No. 7 hangs up the cleats. Dobbs seems to be the odd-man out here, but he’s a smart football player who should be able to carve out a role in the NFL moving forward. Hopefully, that’s in Pittsburgh.

With all drama aside, this is a loaded quarterbacks room that ranks well ahead of anyone else in the AFC North.

Well, here’s the first real surprise, at least to outsiders.

If you’ve read my work over the years here at Depot, you should know I’m a big believer in Tyrod Taylor, who will provide immediate stability to the Browns’ quarterbacks room. Add in No. 1 overall pick, Baker Mayfield, and veteran journeyman Drew Stanton, this has the makings of a very solid, high-ceiling quarterbacks room moving forward for head coach Hue Jackson.

Stanton gives the Browns much-needed depth on the roster, while rookie Brogan Roback, who the Steelers had pre-draft interest in, should give the Browns a long-term project to work with on the practice squad.

Make no mistake, the arrow is clearly pointing up for the Browns, thanks to the stability at the most important position on the field.

The selection of Lamar Jackson at the end of the first round in April was a homerun pick, and was likely worst-case scenario for the Steelers, but the Ravens still have serious issues at quarterback.

As of right now, there’s no doubt in my mind Jackson should be the starting quarterback Week 1, but Joe Flacco has too high of a cap hit, and John Harbaugh will ride or die with Checkdown Joe.  Good news for Ravens opponents, bad news for Ravens fans.

If this were five years ago and the Ravens added Jackson as a luxury, the Ravens would sit at the top of this list, considering Flacco was actually good five years ago. Now? Flacco is a below-average starter, while Jackson is the only shining beacon of hope at the quarterback position for the Ravens.

Behind Flacco and Jackson, the Ravens turn to Robert Griffin III, and second-year pro Josh Woodrum. While RG3 is a nice story, he’s not an NFL quarterback any longer, and Woodrum is just a camp arm at this point.

The present should be Jackson, and the future will definitely be Jackson. This list could change dramatically, should Jackson see the field this year and light it up, like I believe he can.

Just two years ago, the Bengals held down the No. 2 spot on this list, thanks to Andy Dalton and AJ McCarron.  Dalton is back once again, but McCarron is in Buffalo looking to hold off rookie Josh Allen. Additionally, Dalton’s play has fallen off quite a bit.

He’s still a fringe top 15 starting quarterback in my mind, but it’s never been clearer just how dependent he is on good weapons surrounding him.

Behind Dalton, it’s honestly a dumpster fire. Matt Barkley is 1-5 as a starting quarterback in the NFL, sporting a 1:2.25 TD-to-INT ratio in his career, and didn’t play in a single game in 2017. Second-year pro Jeff Driskel, and rookie Logan Woodside round out the quarterbacks room for the Bengals.

Ideally, Woodside develops into a Dalton clone. He was a guy coming out of Toledo that I liked late in the draft. He has a strong arm and some underrated athleticism for the position, but he’s a small-school guy. Driskel is a more athletic quarterback than Woodside, but he’s an erratic passer who lacks touch and placement. He could be a package quarterback, but the Bengals don’t have much hope at all if Dalton goes down during the 2018 season, even for a series or two.