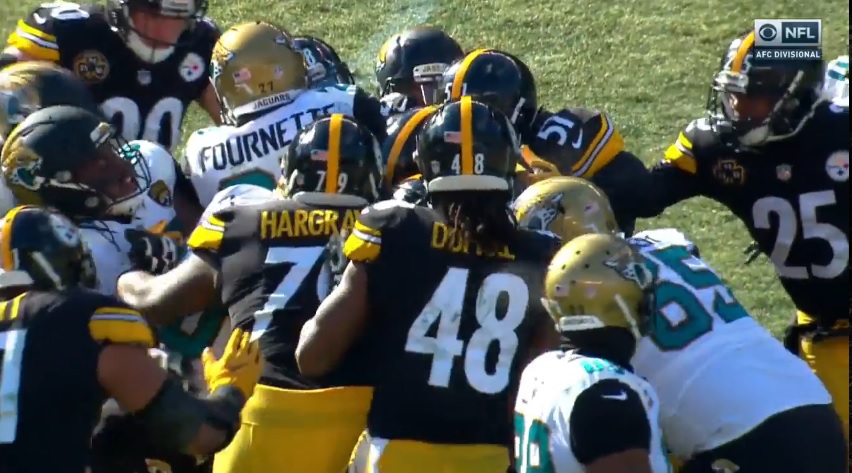 A snap of my son; circa 1989, who just turned 30. He is having a face off wearing the proper headgear but a second after I got this snap the cow slurped him all over the face at Kolb’s Farm outside of Norristown, PA. 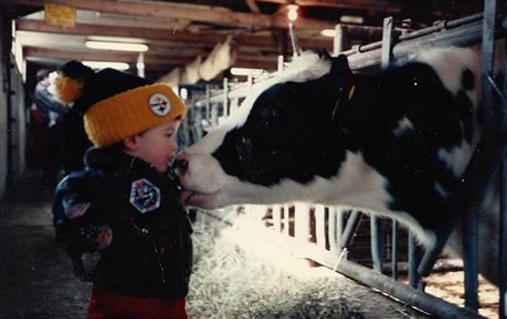 Last summer while opining on the defensive position groups, this was my conclusion on the defense: “Overall; I have less confidence in the Steelers defense than the offense. Same question as last year; is this defense good enough to get to the playoffs and win there? I say yes to part one of the question; still not sure about the second part. A lot depends on how these groups meld together and the ‘next man up’ philosophy working.”

Several folks felt my ‘C’ grades for the defensive position groups were too conservative last year. Wish I had been way wrong on that prognostication. The Steelers have made some changes particularly in the secondary and acquired inside linebacker Jon Bostic in free agency. Let’s see if these moves improve a defense that took a devastating blow with the injury to Ryan Shazier.

As with the offense, two grades will be assigned for each group; first the starters and how they should stack up against the opposition. The second grade is for the back-ups. There will of course be drop off but how well can the Steelers do if they must step in for a couple games.

Defensive Line: This group recorded 23 sacks led by Cam Heyward’s 12 in the regular season. On the other hand, they were absolutely manhandled by an unheralded Jacksonville offensive line in the playoff game. Turns out both Stephon Tuitt and Javon Hargrave were not 100% healthy in that last game but then what happened to the ‘next men up?’ Tyson Alualu and L.T. Walton are back. Dan McCullers is on the 90-man roster but unless there is a dramatic change to his game many see him being replaced, perhaps rookie Joshua Frazier will supplant him. Will new defensive line coach Karl Dunbar have an impact on this group’s play? Let’s see if they can keep the pressure up on passing downs. Stopping the run begins on the line and this group has a lot to prove.

Inside Linebackers: Vince Williams returns. Jon Bostic a free agent acquisition is presumably starting next to him when in the base 3-4. Tyler Matakevich is back and working out with his shoulder healed. The Steelers opted to bring in Sean Spence to play rather than L.J. Fort when both Shazier and dirty Red were hurt is not a good sign of confidence. The Steelers did not look for help in the draft at this position. Does this signal a new look in the defense? Right now, it looks like slim pickings.

Outside Linebackers: Bud Dupree got a 5th year extension. Time for a breakout year. T.J. Watt had a great start in 2017 but seemed to disappear toward the end of the season. He and Bud will need to combine for double digit sacks (they had 13 between them last year) while giving effective pass coverage when dropping back. Can one of them remind us old timers of Jack Ham and chip in a few interceptions too? Anthony Chickillo is back, and Keion Adams has a shot to make the 53 if he can perform and stay healthy. Is anyone else on the roster a potential difference maker? Another group that has questions to be answered.

Cornerbacks: Four players who are in at least their 2nd year and 24 or younger: Artie Burns, Cam Sutton, Mike Hilton and Brian Allen. Veteran Joe Haden is back in his 2nd year as a Steeler plus Coty Sensabaugh. Lots of young talent for new secondary coach Tom Bradley to develop. If the young’uns improve under his tutelage, including communications, positioning & not missing tackles, this could be one of the stronger position groups on the team.

Starters: B+
Depth: B

Safeties: This group underwent a purge. The senior safety on the team is 24-year old Sean Davis in his 3rd season. Will he put it all together this season and create some turnovers? The Steelers heavily invested in this position drafting Terrell Edmunds in the 1st round and Marcus Allen in the 5th. Plus, Kevin Colbert picked up free agents Morgan Burnett and Nat Berhe. Not sure if there will be room for Jordan Dangerfield who will be vying for a spot after not making the 53-man roster last year. It is a stronger group athletically than last year – but how will they fit together?

Specialists: The NFL has managed to neuter most special teams play. Rule changes have made blocked kicks or punts a rarity. Kickoff returns, once the most exciting play are now reduced to touchbacks more often than not. There is even discussion of dropping them altogether. This leaves field goal attempts as the most important special teams play remaining in close games. Chris Boswell is among the best who made several game winning kicks with his toe in 2017. Punting still is important to keep an advantage in field position and Jordan Berry continues to improve. Long snapper Kameron Canady was barely noticed which is exactly what you want from someone in his position. Special teams coach Danny Smith will have a huge role in setting up a replacement for Robert Golden as the upback and to put together those players that will be the gunners, jammers & returners into a functional unit that minimizes penalties and provides the kickers with clean alleys to kick.

So, those are my grades on defense and the specialists. Last year I saw the defensive line as the strength of the defense with the secondary the weak link. This year, I see the secondary as a potential strength if the communications issues that plagued them last year are solved. The defensive line is still strong, but my question marks are at both outside & especially inside linebacker. Will Keith Butler compensate by using some of the defensive backs as hybrid linebackers? It may take a few games for the defense to prove itself. By the end of the season; it could prove to be a stronger edition than 2017 – if the defensive line can control the line of scrimmage; penetrating to pressure the quarterback on passing downs & disrupting running plays.

In the 2018 Memorial Day Weekend: Steelers Friday Night Five Questions, I committed to play songs that Steelers Depot respondents had suggested might be the new Steelers anthem if Renegade by Styx was ever replaced. Here is entry two of 45 from Phil Brenneman II & Steelers D: X Gon’ Give It to You by DMX.