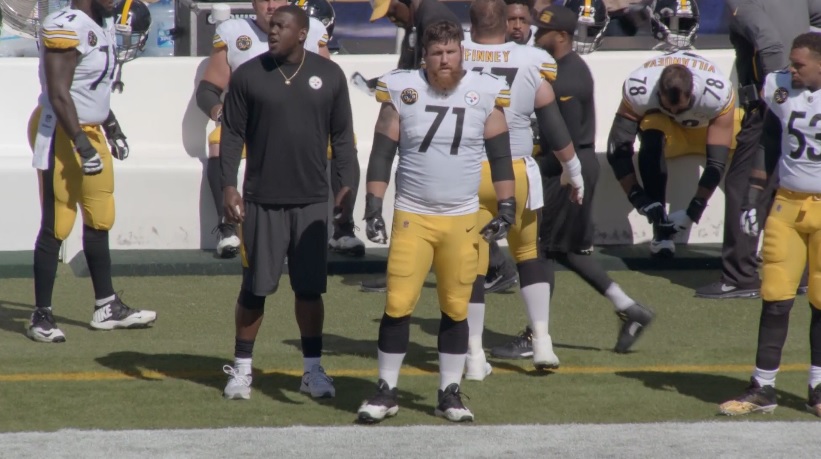 When the Pittsburgh Steelers lost Jerald Hawkins for the season, almost all the attention turned to rookie Chukwuma Okorafor. The realization his development will have to accelerate, the likelihood his odds of playing in Year One increasing in a big way. The same can be said for Matt Feiler, another classic case of a total unknown rising up the ranks, earning the trust of the coaching staff,

Speaking with the media yesterday, Mike Munchak praised how Feiler has come along and handled the new responsibilities they’ve given him.

“He’s one of those guys who has done a nice job,” Munchak said via the team website. “He came in as a tackle in the league, moved inside to guard. Done a really good job at guard, we’re comfortable with him there. Feel like he could play right tackle if he had to. He’s taking snaps at center as an emergency center. He looks pretty comfortable at center. Right now, he’s one of those guys getting a lot of opportunities at a lot of spots. Just real happy with his development. He’s really done a nice job.”

He’s home-grown in a similar way Alejandro Villanueva was; not technically, Feiler spent two years on the Houston Texans practice squad, but Pittsburgh is the team who has developed him the most and gotten him to the point of playing on Sundays. Pennsylvania has always been his home anyway, a PA native and Bloomsburg alum.

Munchak compared Feiler to following in Chris Hubbard’s footsteps, it’s fair to call Feiler the next Hubbard, and also pointed out guys like Ramon Foster who has enjoyed a long, successful NFL career and overcoming long odds.

“That just shows you there’s examples all over the league. When it’s right in front of you, guys come in, work hard, do their job. Don’t get caught up in what’s going on, don’t worry about the numbers. When you get a chance to be on the field, do your best.”

That’s the mentality Feiler has clearly shown. With Hawkins out of the equation, it feels virtually certain Feiler will make the team and dress every Sunday. While Munchak hinted at using him as a primary interior player, mostly at guard, he’s capable of playing four spots on the offensive line with the exception of left tackle. Although Okorafor recently confirmed he is working at both tackle spots, perhaps the Steelers will lighten his workload during the season by making him the backup only at left tackle with Feiler being the guy at right.

Regardless, the Steelers have found another diamond in the rough, one of several in the last ten years. From Foster to Kelvin Beachum, who, remember, began his career as a swing player, to Villanueva, Hubbard, and now Feiler, the Steelers have one of the best offensive lines in football. And one of its best coaches, too.