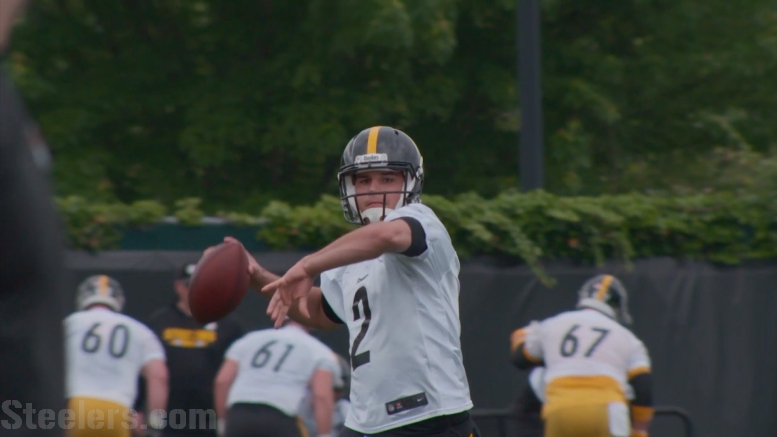 The Pittsburgh Steelers went out of their way to spend a lot of time evaluating quarterback Mason Rudolph when he was coming out of Oklahoma State. They had been watching his tape for a couple of years already. They wanted to get to know who he is as a person, if he has the mentality to succeed.

They became convinced that he does, but they were not convinced of their own personal need for his position at the top of the draft. So they waited. They passed on him. Twice. And they got their safety and their wide receiver out of it. But once they took care of their immediate needs, and their guy that they came to believe in was still there, they got excited. They went up and got him.

It goes without saying that Rudolph looks good on tape. He wouldn’t be here if he wasn’t. But the Steeler really seemed to fall in love with the person as much as the player, and I think a lot of fans have begun to see the same things. The rookie recently participated in a questionnaire for the team’s website that really helps to illuminate his character.

One of the questions he was asked to answer was why he plays football. He talked about loving the game, but not being able to play quarterback when he was younger, because the quarterback was the coach’s son. So once he got to play, he wanted to max out his ability at that position. And to that end, he has chosen to embrace every aspect of the journey.

“I love the position. I love the game”, he began. “I love the stress of learning a new offense. The reward of going out there, understanding it and making a great play. It’s a feeling, it’s an adrenaline rush like there is nothing you can compare it to. I want to continue to do that”.

How many players would actually say that they “love the stress of learning a new offense”? I’m going to guess it’s not many. Even Morgan Burnett, and eight-year veteran, talked about feeling almost like a rookie again over the prospect of learning a new defense, even with his familiarity in the Dom Capers defense in Green Bay.

Rudolph talked about his drive to maximize his potential in more than one answer. He also said that he wants to “make sure I get to my ceiling as quick as I can”. Back around the time of the draft, after the Steelers took him and he knew he would be playing behind Ben Roethlisberger, he couldn’t help but saying that he felt he could have stepped in and played right away if he were drafted by a team with an immediate need.

You obviously need to be tremendously talented to be a success at the quarterback position in the NFL. But it also goes far beyond your mere physical abilities, and I don’t think anybody can question Rudolph’s mental makeup.