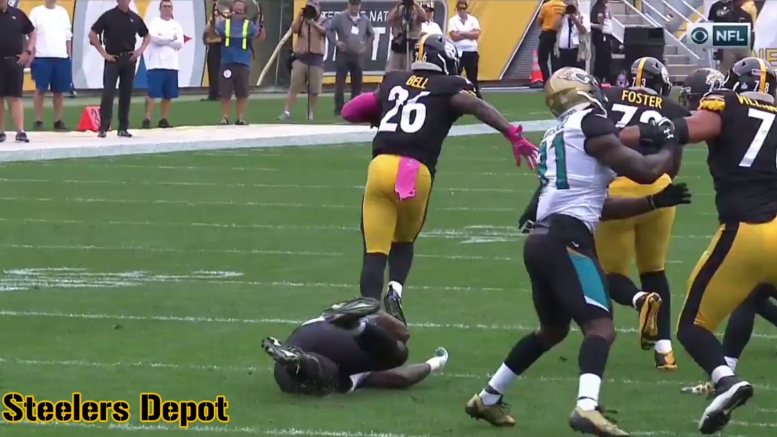 Hey, want to complain about something from last season?

Well I guess that’s probably a rhetorical question. Of course you do. I’ve been here long enough to know that. so I’ve got something for you today. Pittsburgh Steelers running back Le’Veon Bell spoke to the NFL Network after the revealing of the top of their Top 100 players list, and he brought up the subject of looking ahead to other opponents and how he saw it as a problem last year.

I know there was a lot of debate going back and forth on this issue during the season, with a lot of people on either side, one party saying it was a big problem, another saying it wasn’t even an issue at all. Even players have been unable to agree with whether or not it was an issue, but Bell seemed to declare where he stood.

He was the top-ranked RB on the #NFLTop100!@leveonbell talks his #5 ranking, 2018, and his contract situation ⬇

Many fans believe that the Steelers looked past the Jacksonville Jaguars even though they were the only team during the season to even come close to dominating them. their other two losses were very close games, one going into overtime and the other involving a negated touchdown that would have given them a very late lead.

“We’ve got to tighten up on the must-win games. I don’t think we would have even been in that situation of playing the Jaguars in that second-round playoff game if we take care of business at the beginning of the season”, Bell said.

“We lost to the Bears, we lost to the Jaguars earlier in the season, then we—I kind of think we got robbed versus the Patriots—but we ended up losing that game”, he went on. “Those are three games that we’re definitely capable of winning. Obviously the Jaguars plain out beat us the first time, but the Patriots game and the Bears game, those were inexcusable. Those are games that we have to win and we could walk away 15-1 going into the playoffs and in a whole different ballpark”.

Any way you slice it, going 13-3 is still a very good season. It’s one of the best records the Steelers have ever finished with in their history, and the best record they have had since Ben Roethlisberger’s rookie season in 2004. But there was definitely a feeling of leaving something on the table.

Even still, they were the number two seed and playing host to the Jaguars. They should have been able to win that game. Many things contributed to that loss; was hubris one of them, assuming that had a date with destiny in Foxboro a week later?