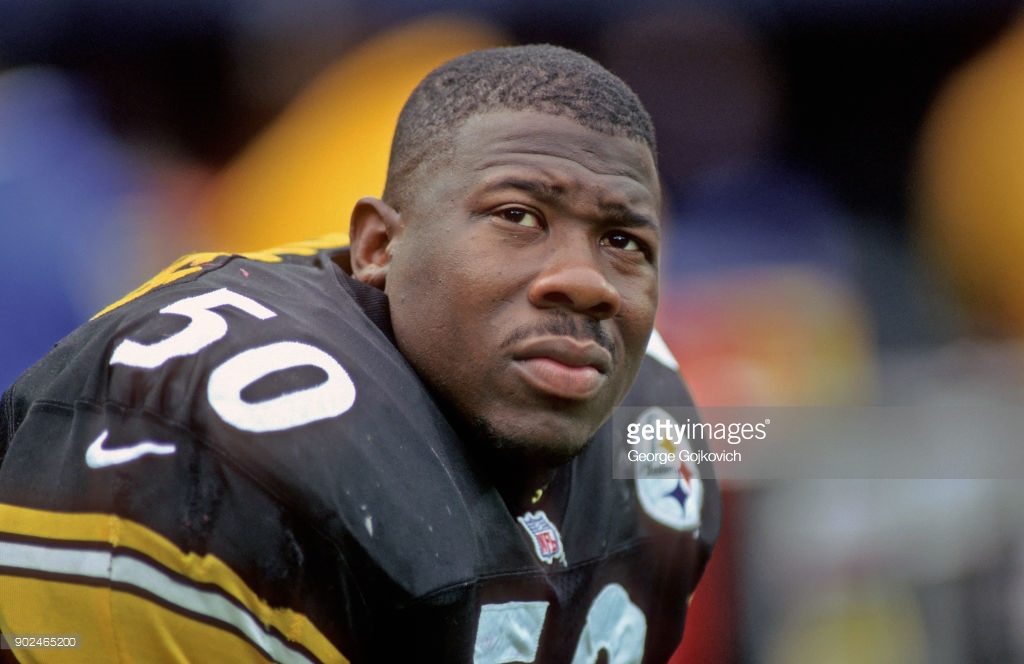 Per reader request, linebacker Earl Holmes. The man with the similar name of the more famous defensive linemen who made up the Steel Curtain defensive line, Holmes’ career wasn’t as prolific on the field nor as infamous off of it.

In college though, he certainly made his mark at Florida A&M, a HBCU in the MEAC and a conference with a long history of producing top Steelers’ talent. Holmes would be inducted into his school’s Hall of Fame in 2005, for making plays like these, clips I found in a highlight reel from 1995. He’s #45 in these clips.

In that first clip against Southern, he recorded a nearly unbelievable 30 tackles, finishing his prolific career with over 500 of them.

A 4th round pick in 1996, he was confident from the moment he got that phone call, congratulating the Steelers on selecting the best linebacker in the draft.

Holmes saw little playing time his rookie year but picked up his first career sack late that year, taking down Kerry Collins in a loss to the Carolina Panthers. With Jerry Olsavsky moving onto Baltimore for the ’97 season, Kirkland stepped in opposite Levon Kirkland and started all 16 games, one of a whopping eight Steelers to pick up at least four sacks that year. Playing in that Dick LeBeau, exotic, aggressive defense, a system that suited Holmes well, who played in a 3-4 in college.

It was a starting spot he wouldn’t give up. His durability was underrated, missing only two games from 1997 to his final year as a Steeler in 2001, playing in 78 of 80, and served as a steady, run-stopping presence. In three of those five years, Pittsburgh finished with a top five run defense.

Holmes made a self-admitted difficult decision to leave the Steelers after the 2001 season, spending the following year in Cleveland and a final three in Detroit. Holmes was on the losing end of the Steelers 36-33 wild(card) comeback victory in 2002 – a game we’re going to be highlighting in the near future, by the way – and then spent three dreadful years with the Lions, playing for two different head coaches and defensive coordinators.

As he would later explain, leaving Pittsburgh was a mistake. Here’s what he told friend of the site Ron Lippock, who interviewed him in 2013.

“To this day, the best time I had was in Pittsburgh. I offered some advice to Joey Porter when he went to Miami. It’s a business. The contract thing – you don’t always have to go for it. At the same time, I know I called Cowher after I left and told him I made a mistake. He told me it’s not like this everywhere – that I should think before I left to play for Cleveland. I didn’t understand then.”

Post-career, he got back into football on the coaching side, returning to his alma mater, starting as an assistant, then to defensive coordinator, and taking over head coaching duties late in 2012. For 2013, he littered the rest of the coaching staff with ex-Steelers. The Shake to his Bake, Levon Kirkland as DC, Ernie Mills as the WR coach.

Unfortunately, that was the highlight of his coaching career there. Messy on the field and off. A record of 5-15 in 2013 and 2014 followed up by a legal battle after he was fired in the middle of that ’14 season. He sued the school for the remainder of his contract, a two-year battle that resulted in a judge ruling against him. At last check, Holmes appealed the ruling and there arguments apparently heard just a few days ago.

Earl Holmes, your blast from the past.