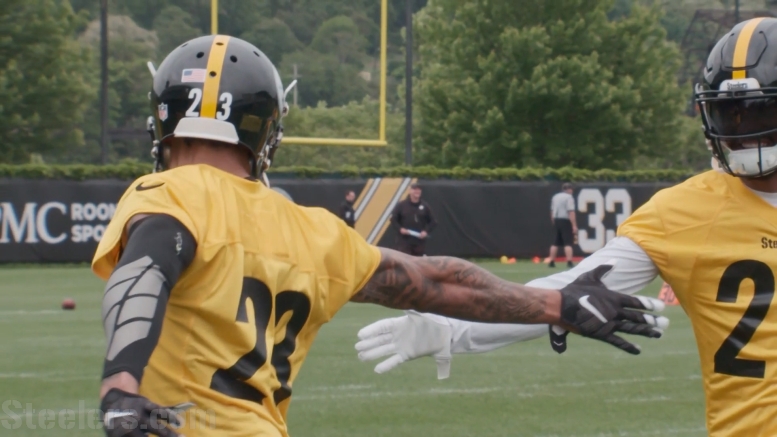 While I have made light of the recent absences of Pittsburgh Steelers quarterback Ben Roethlisberger and wide receiver Antonio Brown from OTAs—two players who have not really had many absences in the past, by any means, in spite of their long-established reputation—veteran cornerback Joe Haden isn’t taking any practice for granted.

No, it’s just something that is in his nature. Even though he is heading into his ninth season in the NFL—even if it is just his first offseason in Pittsburgh—he values every opportunity he gets to be able to work on things in a team environment.

“As much as we get a chance to be here, I want to be here”, he told reporters during OTAs last week. “Getting that work on the field with my teammates when I am out here, I am just going for it. It helps me get better, work on my techniques”.

Haden has been to the Pro Bowl a couple of times in the past, so I’m going to take a wild guess and say that his technique is probably not all that bad, but it never hurts to improve yourself. And he is adapting to new techniques as he gets older as well. Plus, there’s only one way to get into shape to play football.

“When you are doing the plays on timing, working with your safeties, your linebackers, getting communication together, that is stuff you can’t make up for”, he said. “For me being new to the team, with new coaches, and changes in the secondary, the more people you can have here to get a grasp on things the better”.

As I have talked about several times this offseason, the Steelers do not have any player on the roster in the secondary that has spent more than two seasons on their 53-man roster, so it is fair to say that there is still plenty of room to build chemistry together.

The longest-tenured player currently are Artie Burns and Sean Davis, a pair of starters who were the team’s draft picks in the first and second rounds, respectively, of the 2016 NFL Draft. Haden and Mike Hilton have one season in Pittsburgh under their belts, while Morgan Burnett is just coming in as a free agent, and Terrell Edmunds is of course a rookie.

Chemistry is probably a big component in being able to effectively communicate with your teammates as well. I’m just going off a hunch here. Perhaps the secondary will have fewer communication breakdowns as they work with each other more. Even if it is just in OTAs.