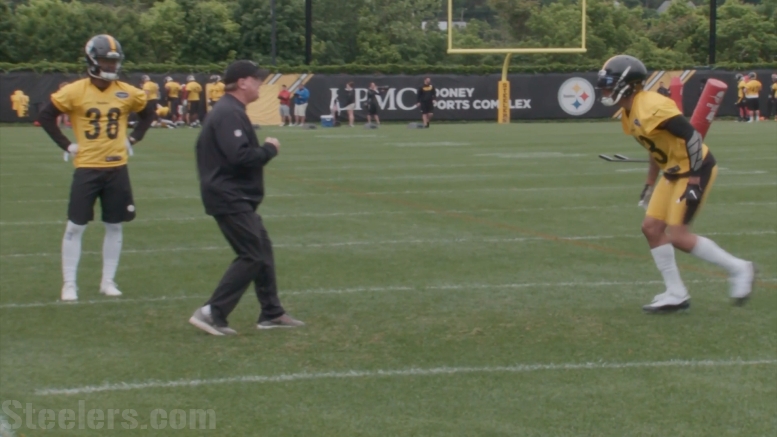 As much as I have been supportive of former Pittsburgh Steelers defensive backs coach Carnell Lake, and have tried to put the pin back into conspiracy theories about him being forced out, it’s impossible to deny that the team’s new coach on the job, Tom Bradley, has been showered with accolades by his players so far.

Of course we’re literally talking about the first days of June here. Bradley’s resume is far from determined right now, and will be decided by the results on the field. People still liked Lake at this point in his career, too, after all.

But there has been one very common theme throughout all of the comments made by players about Bradley, and that is that he is a coach who really stresses fundamentals and details. Whether it’s rookies or seasoned veterans, everybody has come away with the same impression.

“He’s very very [about] attention to details. I think that’s something that with a lot of young players in the secondary that we need”, ninth-year veteran Joe Haden said about him recently during OTAs, for example. Haden is only in his second season with the team and never had an offseason with Lake to compare, however, it should be noted.

And to his point, everybody expected to play a role in the secondary outside of himself, Morgan Burnett, and possible Nat Berhe are all young players, no more veteran than third-year guys, and among those is Artie Burns, who is 23 years old.

While that sort of detailed coaching is valuable for the young players, Haden said that he appreciates it as well. “It’s cool because I’m trying to do the right thing. I’m trying to do stuff the right way, I’m trying to lead by example, and Coach isn’t doing anything to hurt us”, he told reporters.

“Anything that he’s doing that’s extra is just that little more he feels like will help us make a play, will make us a step closer to something. A lot of the stuff is just little tedious stuff, but just at the end of the day that’s stuff that we need to do so we can pay better attention to the details.”.

I’m sure the continued praise from players about Bradley’s commitment to detail will only serve to fuel the fire for optimism about the secondary’s future. I only wish that it didn’t have to constantly be paired against the Lake era, while discounting the changes and individual development in terms of personnel what we’ve seen since last season.