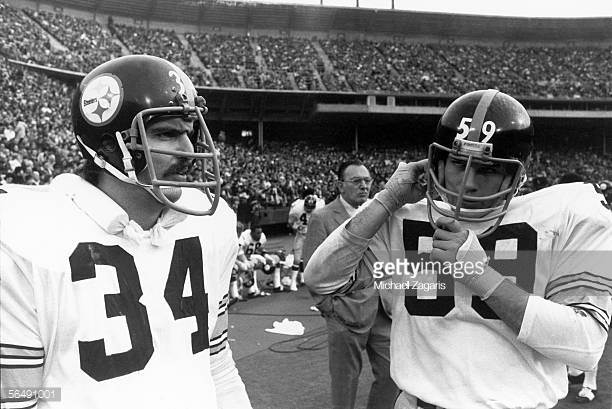 Joe Greene was a first-ballot, no-doubt Hall of Famer. Now, he’s trying to convince the league to induct one of his teammates. That teammate is Andy Russell, a player who, in Greene’s mind, has been snubbed by Canton. He joined the Talk of Fame Sports Network to state his case for Russell to be enshrined as part of the senior committee.

“We talk about him as being the third guy (as a linebacker), but he’s really the first,” Greene said, referencing two other Hall of Famers next to Russell, Jack Ham and Jack Lambert. “Andy Russell was there when we were the Steelers … you know, the team that everybody could beat. Andy suffered through some terrible years.”

Those terrible years were before Chuck Noll was hired to Pittsburgh. Russell was drafted by the Steelers in the 16th round of the 1963 draft. From ’63 to ’71, Pittsburgh had only one winning season (his rookie year) and never made the playoffs.

With Noll though, who built the team from the ground up, Russell won a pair of Super Bowls before retiring after the 1976 season. Pittsburgh would go onto win two more Super Bowls in ’78 and ’79. Throughout his career, he picked off 18 passes and per Pro Football Reference’s Approximate Value, Russell is tied for 18th in franchise history. That’s above players like L.C. Greenwood, Carnell Lake, and Joey Porter. He made seven career Pro Bowls, only one fewer than Ham.

Russell was already a pretty good linebacker before Noll, but he made Russell a great one, getting him to buy into the idea of focusing on the details of the position. According to Greene, Russell passed that philosophy along to the rest of the locker room.

“Andy was a special, special teammate, experiencing all of the bad things that happened with the Steelers. He could share with the group the kinds of things that you needed to do to be successful. He was the  guy that ‘brought the word’ to the locker room — and I mean by ‘bringing the word,’ the coaching philosophy, the teaching that Chuck Noll and his staff placed on us.”

And helped bring along the new guys on the field. After all, it was a completely revamped defense, injected with tons of talent – but also a ton of youth – that went through growing pains early on.

“He’d be telling teammates what to do and where to be, telling them about formations and what plays (to anticipate).”

The senior committee inducts at least one player per season. There have been several Steelers who have gotten in that way in the past. Cornerback Jack Butler was the most recent in 2012. Dick LeBeau got as part of the 2010 class and John Henry Johnson got in 30 years ago.