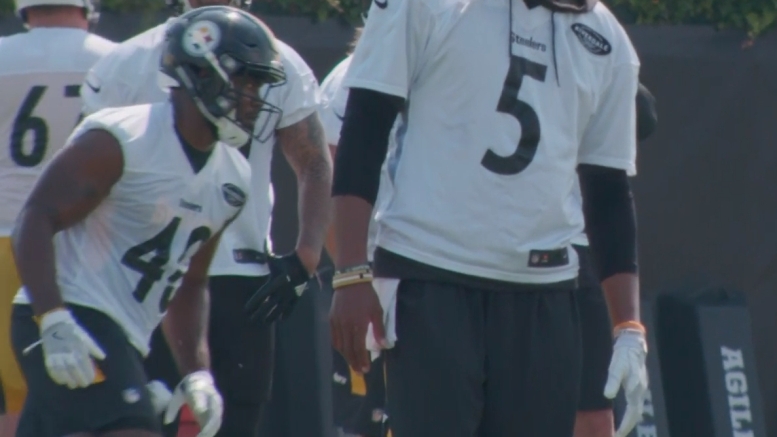 The running back position is certainly looking a lot different heading into the summer break in 2018 in comparison to a year ago. Or, at least, it is a lot deeper than it was. Returning are Le’Veon Bell (whenever he signs a contract), second-year man James Conner, and veteran Fitzgerald Toussaint. The rest of the group consists of new faces from this time last year, though veteran Stevan Ridley finished the regular season with the team and is now back.

The most notable names being added to the mix since that time are a pair of rookies, fifth-round pick Jaylen Samuels, who is more of a multi-purpose offensive player rather than a true running back, and undrafted free agent Jarvion Franklin, a big back out of Western Michigan.

Both of those descriptors are relevant. For one thing, we all know the Pittsburgh Steelers prefer their bigger running backs based on their recent drafting history under Mike Tomlin—Chris Rainey and Dri Archer notwithstanding.

The fact that he is from Western Michigan also means that he is with familiar faces, because the Steelers have two of his college teammates on the roster. They drafted outside linebacker Keion Adams in the seventh round of the 2017 NFL Draft, and then they added one of Franklin’s blockers in the third round this year, tackle Chukwuma Okorafor.

Franklin talked to Mike Prisuta for the team’s website about what it meant to be in Western Michigan under former Head Coach P.J. Fleck and the culture that he installed there, building the program into one of sudden relevance.

“Being around those guys, they really taught me how to work, how to embrace the process”, he said. They taught me how to hold on to one another when things get tough. We started low but we ended up being in a better place than when we got there”. There are eight players from Western Michigan that Franklin played with currently on rosters—three in Pittsburgh.

Over four seasons with the Broncos, he rushed for 4867 yards on 942 attempts, scoring 52 touchdowns on the ground. He had another four touchdowns through the air on 61 catches, on which he gained 670 yards.

The bulk of his production came during his rookie season in 2014. He recorded 306 rushing attempts for 1551 yards and 24 rushing touchdowns. But he has been a consistent running over the course of his four years there, with his two best rushing averages coming in his final two seasons.

He is bringing the same mindset that he learned in college to his time with the Steelers, as well. “I’m just going to come here and play my role”, he said. “Whenever the coach calls on me and I get a few reps in practice, I’m going to make sure I deliver on each and every last one of them and just really start at the bottom and by the time I leave this place, hopefully everyone will know who I am”.