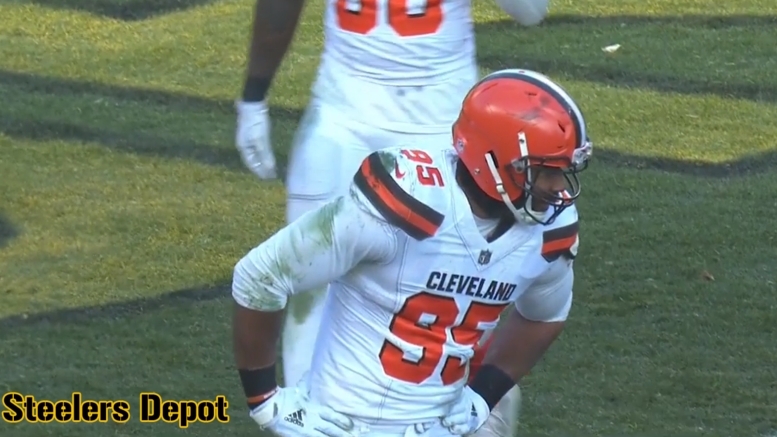 I think most people agree that the Cleveland Browns made the best decision available to them last year when they chose to draft edge rusher Myles Garrett with the first-overall pick in the 2017 NFL Draft. He was the consensus top player in the draft, and they were in need of a star defensive piece that could bring pressure, while quarterbacks like Mitchell Trubisky didn’t seem like sure things.

When he was on the field during his rookie season, Garrett did look the part. He recorded seven sacks and a forced fumble last year, but he did so in 11 games, in nine starts. He missed five games due to injury, which is something that he dealt with going all the way back to the spring.

He knows he has all the talent in the world, telling reporters that he expects to be 10 to 15 times better in year two than he was a season ago. But even he knows that there’s one trait in particular that he needs to exhibit more consistently: availability.

“The best quality is availability”, he admitted to reporters. “I have to be present”. Garrett missed time from the offseason through the regular season due to at least three separate injuries, including a concussion, as well as an ankle injury that caused him to miss four games.

He believes all that time lost, and the time not training to be in football shape, limited him last year, and he wants to avoid that in the future. His defensive coordinator, Gregg Williams, is looking to see the same thing, and he thinks one of the issues might be the young player overworking himself.

“He is one of the few guys that I have had to coach that I know I am going to have to keep my hand on to hold back”, he said. “One of the things with him is his overworking. He works so hard because he does not want to be good; he wants to be great”.

“Sometimes he can be his own worst enemy in that respect because he works so hard physically that he has to do a good job with recovery also”, Williams went on to say about perhaps his most prized defender. “The next thing is this—and he knows—if he stays healthy, watch out”.

Each team in the AFC North made significant additions to their pass-rushing arsenal during the 2017 NFL Draft, with the Browns leading the way by adding Garrett. The Pittsburgh Steelers have the very promising T.J. Watt, as well, who is more of an all-around player, showing a penchant for playing in coverage.

The Cincinnati Bengals seemed to find something of a gem in the middle rounds with Carl Lawson, who had success as a situational pass-rusher as a rookie, while the Baltimore Ravens are hoping to see more from their two second-year pass-rushers, Tim Williams and Tyus Bowser.