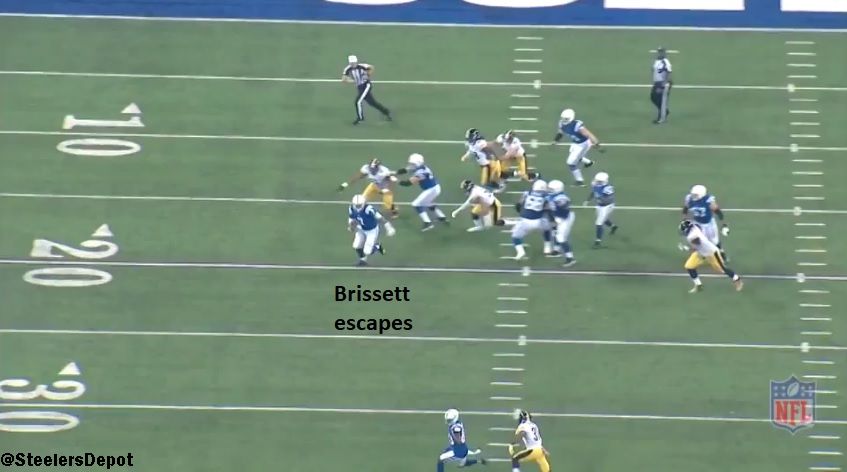 The Pittsburgh Steelers led the league in sacks last season, topping the charts with 56. But it didn’t feel like the Blitzburgh of old and there’s legitimate concern over their ability to sustain that, mainly because they don’t have the dominant edge rushers like they did a decade ago.

One way they can do that? Better rush balance, integrity, and the ability to finish plays. It’s a topic we’ve brought up before and while I think the Steelers got better at that last year, it was still far from perfect and there’s definitely room for improvement.

Today, we’re going to look at a couple of those issues and how they robbed the Steelers of sacks. And times where players flat out didn’t finish the play.

A team’s pass rush isn’t just a free-for-all where each player is working independently and focusing solely on their matchup. They have to work as a unit, just as an offensive line has to know what the guy next to them is doing. That helps create rush balance and integrity and in theory, avoids creating giant escape lanes for the quarterback.

Against Baltimore in Week 4, the Steelers rush four and run a twist to each side, the outside linebackers crashing into the B gap with the end looping around. 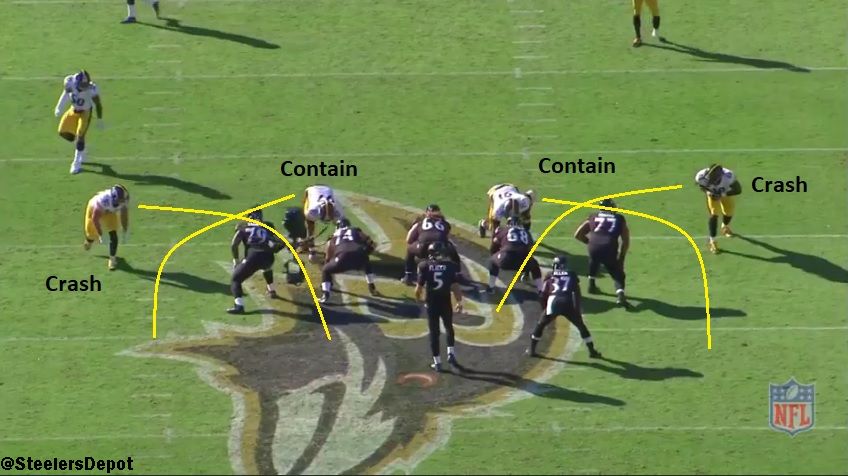 The goal here is a balanced, 2×2 rush. But two things go wrong here.

1. Bud Dupree gets buried into the ground on a failed spin move, taking him out of the play.

2. T.J. Watt drifts across the center to the opposite side, basically making this a 3×1 rush with only Cam Heyward to the right (offense’s left) side. 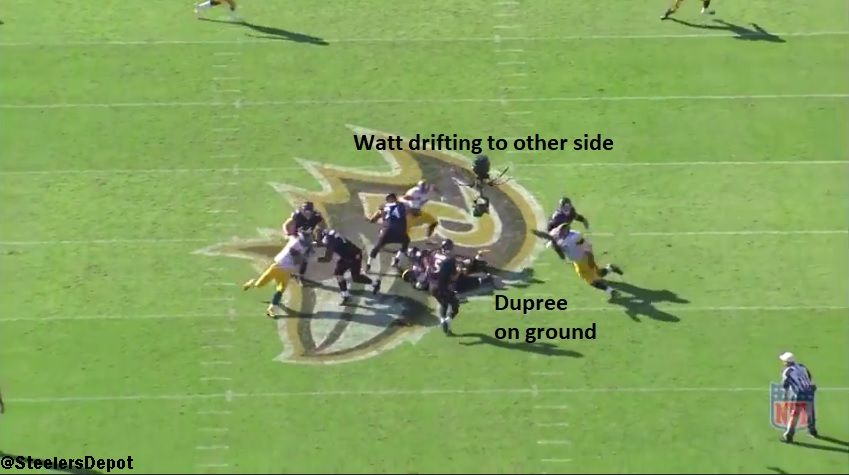 Although Stephon Tuitt gets pressure looping around and forces Joe Flacco to climb the pocket, there’s no one else to contain him. Dupree is on the ground, Watt is out of position, and Flacco escapes through the hole that’s left.

Take a look at the whole thing. The pass ends up incomplete but that’s a far worse outcome than a sack. Tuitt should have been able to get this one.

Now let’s look at the Jags game. Similar issue. Four man rush. No stunt here but to the right side, Dupree and Tuitt basically end up in the same area. Both rushing to the outside, both pushed upfield, and there’s a huge lane for Blake Bortles to escape to. 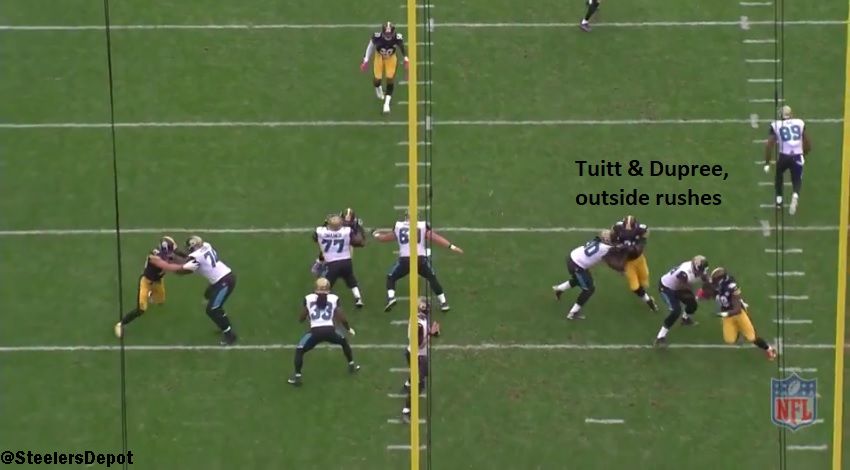 There is some element of pressure here, Dupree beating the right tackle (you see some stiffness in him trying to turn the corner, though) but if Tuitt isn’t shoved upfield, Bortles can’t climb and escape as easily and Dupree may have ended up with the sack. 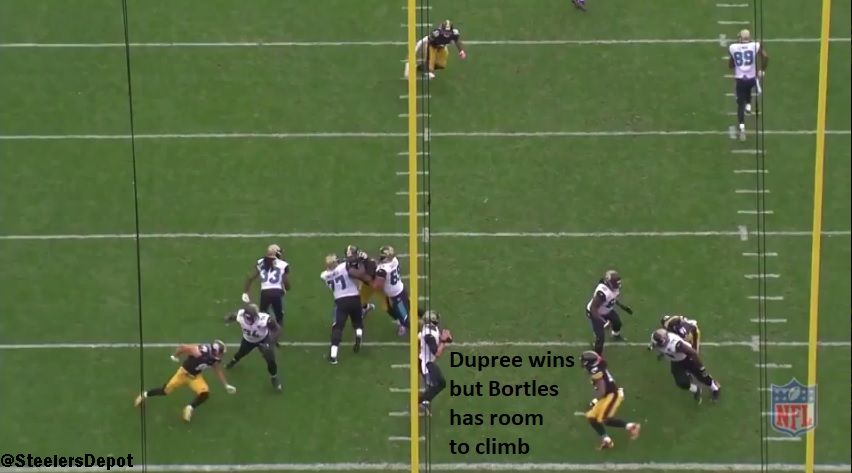 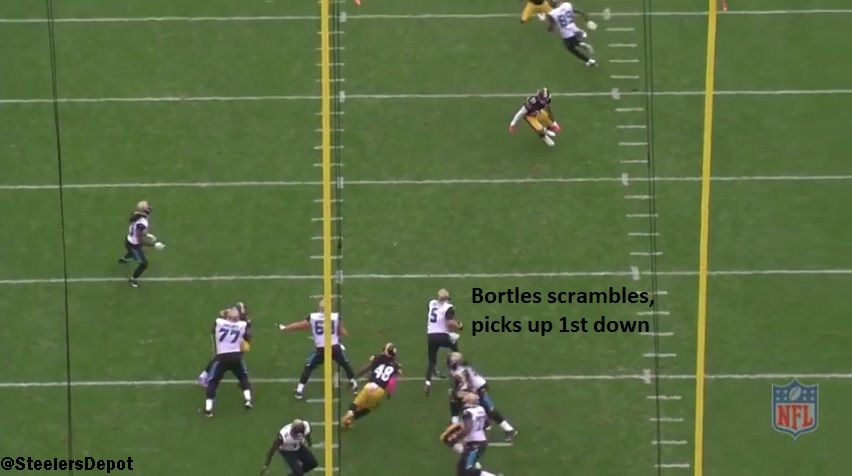 Instead, Bortles scrambles for a first down on 3rd and 9 and the Jags move the chains. Big blow to the Steelers’ defense.

Here’s a look at a five man rush. A four man rush can be tough to create balance because of the numbers disadvantage. Four rushers versus five blockers – the defense is one gap short. With five, there shouldn’t be any overlap.

But that’s what we get here against the Colts. This one is a little different because I think Shazier is doing a little free-lancing from his original assignment (it was a good decision), but Dupree and Shazier end up in the same spot. In the A gap between center and right guard. 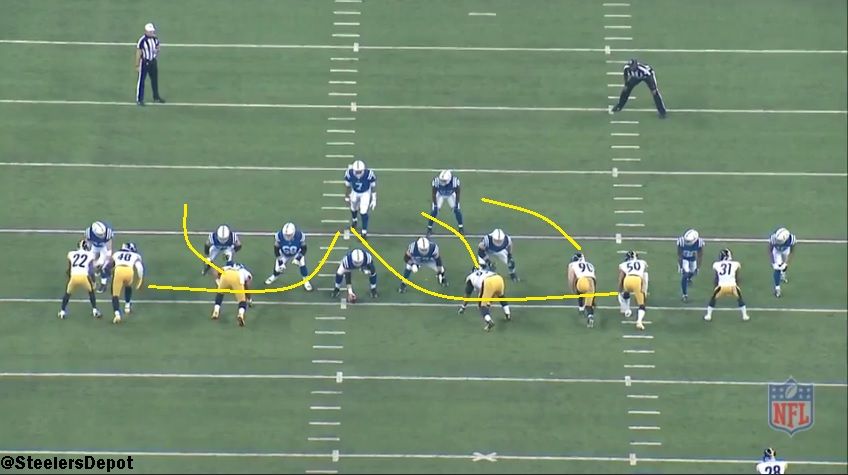 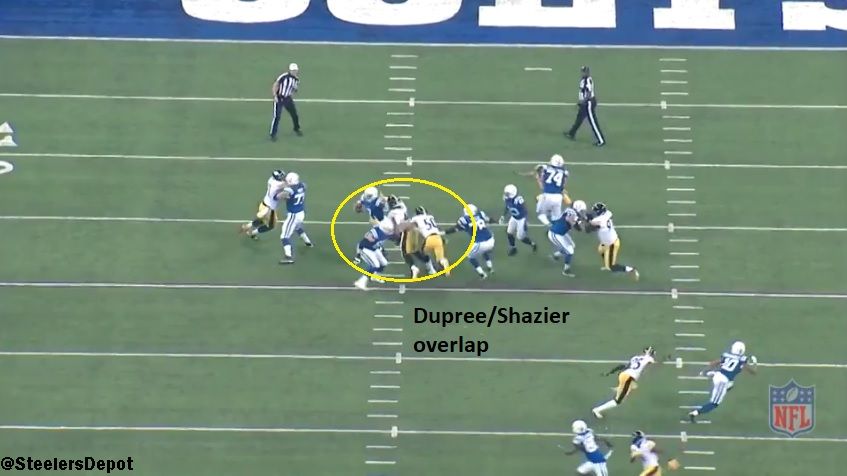 Shazier is free, the guard is frozen versus Dupree, this should’ve been a sack. But again, there’s an escape lane, Jacoby Brissett has the freedom to climb and he gains four. Another would-be sack. Another wasted chance.

Finally, this last example is all about finishing the play. You probably remember it. Dupree just…stopping on this sack chance of Andy Dalton. I think his explanation was he thought the ball was thrown but either way, it’s an obvious missed chance and the easiest one he had all season.

If Dupree records this sack and say, gets that one versus Jacksonville, he finishes the year with eight, tied second on the team and his numbers look much better.

It’s a tall task to put the pass rush on Heyward’s shoulders like last year. Asking him to record 12 sacks again is a lot. It’s gotta be more of a team effort and to maximize some of the lack of talent in terms of pure pass rushers, the Steelers’ defense must play as more of a unit and more technically sound in their rush lane integrity.