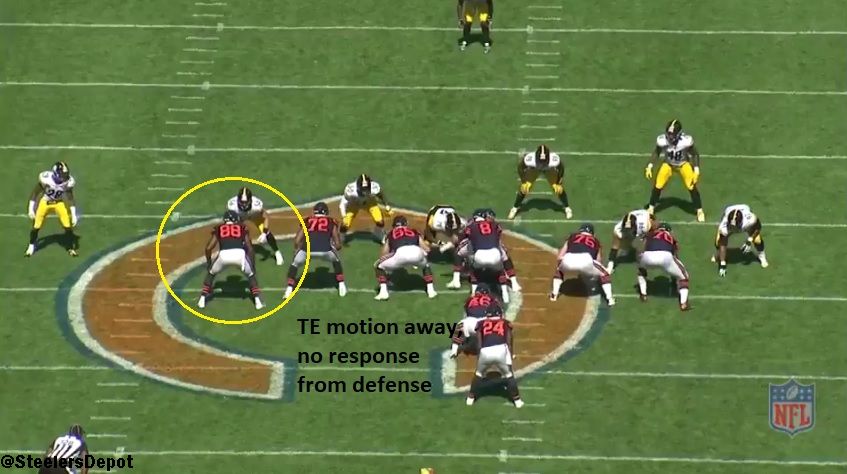 The faux 4-3. The 3-4 over. The “Hey look! T.J. Watt isn’t on the line of scrimmage.” Whatever you want to call it, the Steelers have slowly added more of that look to their defense since Keith Butler took over as defensive coordinator. We wrote about its roots a long time ago, a callback to the Tony Dungy-run defenses.

But it’s a formation that has had mixed success. To paint it with a broad brush, it’s boom or bust. An aggressive, attacking front that tries even more than usual to one-gap and get penetration. When it works, it can create some serious splash. When it fails…the results aren’t typically pretty.

Butler spoke about the look to reporters yesterday, specifically how offenses have looked to counter it. It’s some of the most in-depth commentary he’s given.

“What you’re talking about, we played at Chicago, and they hurt us…we try to get a big defensive end on a tight end and try to get a mismatch that way. What they did was they started to take the tight end off the ball and motion across and get on the other linebacker and stuff like that, run away from the big defensive end. And then cut back to him and make him open field tackle.”

So let’s look at the Bears game to put some tape on what Butler is talking about.

The Steelers used their 3-4 over front 16 times in the Bears game (Butler most commonly runs it as a response to a heavy tight end grouping). But it allowed several big plays 6.4 yards per carry, cancelling out the splash it made too, half those runs going for three yards or less.

What the Bears did effectively was changing the strength of the formation. Pittsburgh aligns their front to the strong side, the backside defensive end shifting to the playside 3 tech and the nose tackle slanting into the backside A gap. So when the tight end motioned to the other side, the Steelers’ defensive line was aligned weak, with only one DL to the new strength of the formation, and that was only in the A gap.

Here is how Chicago initially lined up on one run early in the game. Pittsburgh responding with their over front. Initially, Butler gets the matchup he wants. DE on the TE. 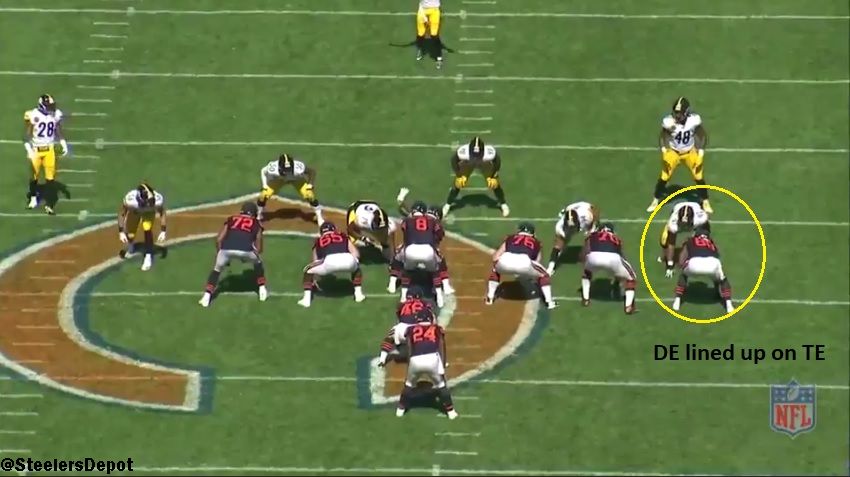 And then the tight end motions away.

Chicago has the numbers advantage to the playside and for Pittsburgh, they run into several issues. Anthony Chickillo can’t get off the block, Sean Davis gets cracked, Vince Williams reached by the center, and Javon Hargrave – despite a good effort – can’t work down the line quickly enough. That’s asking too much out of him anyway.

But the biggest problem is the Steelers simply don’t have the numbers advantage. Even including Williams, who we know is out-leveraged on the snap, it’s six versus five at the point of attack. Artie Burns comes down to replace Davis but…that’s a corner in the run game, a win for the offense.

Same thing happens later in the game. TE motions over and shifts the strength of the formation. 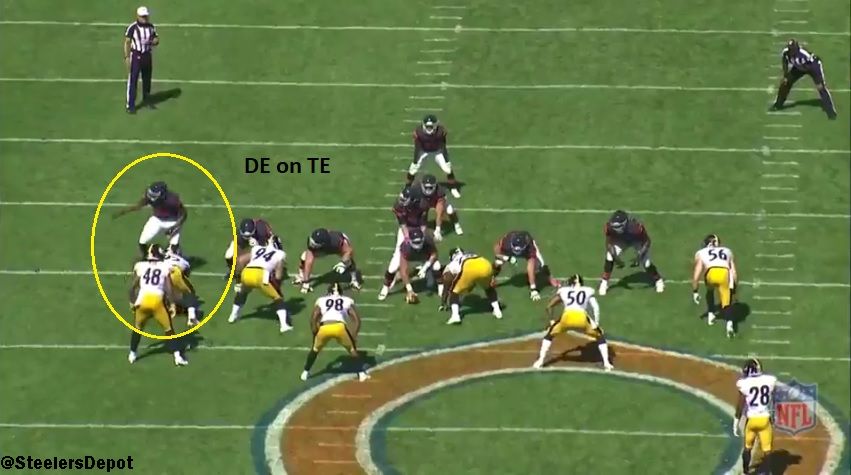 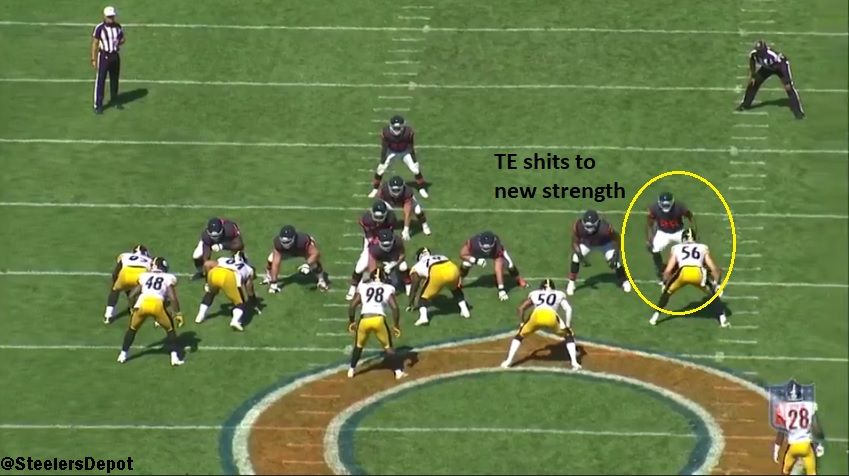 Ryan Shazier gets good penetration and it looks like this play is going to go for a loss. But Tarik Cohen cuts it back and, as Butler said, he’s one-on-one with the backside defensive end instead of a more agile linebacker. 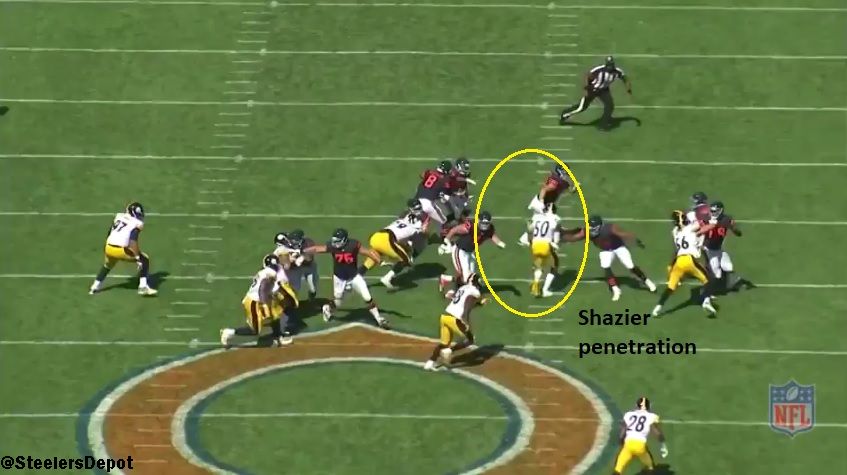 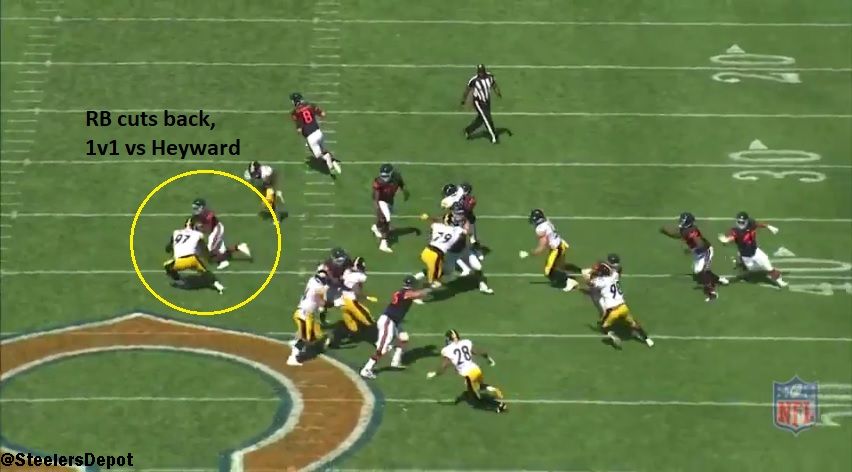 It wasn’t exclusive to the Bears game too. In Week 11 versus Tennessee, they did the same thing, getting a big gain and more importantly, breathing room out of their end zone. Motion, change the strength, get the numbers advantage (four blockers vs four defenders is a win for the offense). Heck, the Titans screwed up the scheme on this run, the tight end doubling up Bud Dupree, and Derrick Henry still turns it into a major gain. 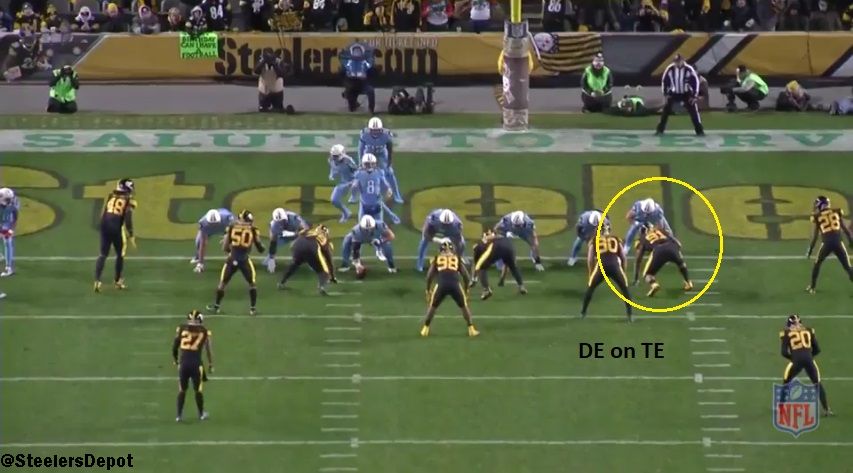 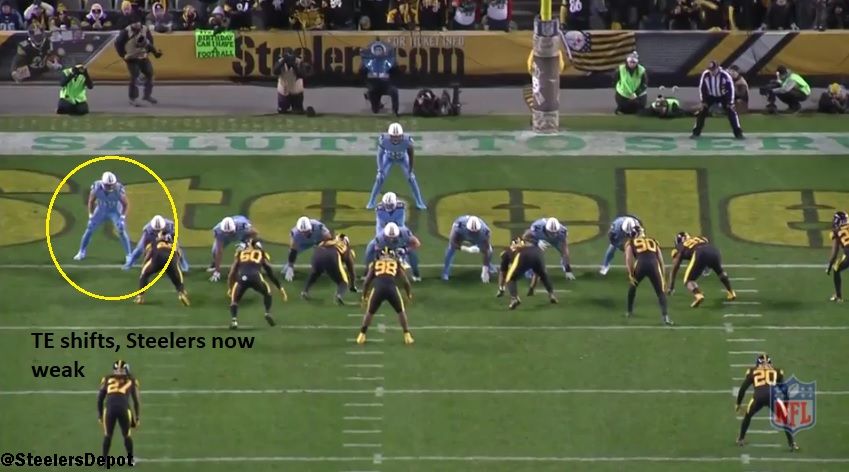 Here’s the whole thing, including the motion.

Butler admitted that if you do something long enough, offenses are going to counter. My biggest gripe is that the defense isn’t responding to the motion. They know they’re in a bad position. Why can’t the Steelers shift back over too and get back to an over front?

It looks like Butler did a little more as the season went on, you can see Vince Williams slide down a gap, but I don’t think it was anything near good enough.