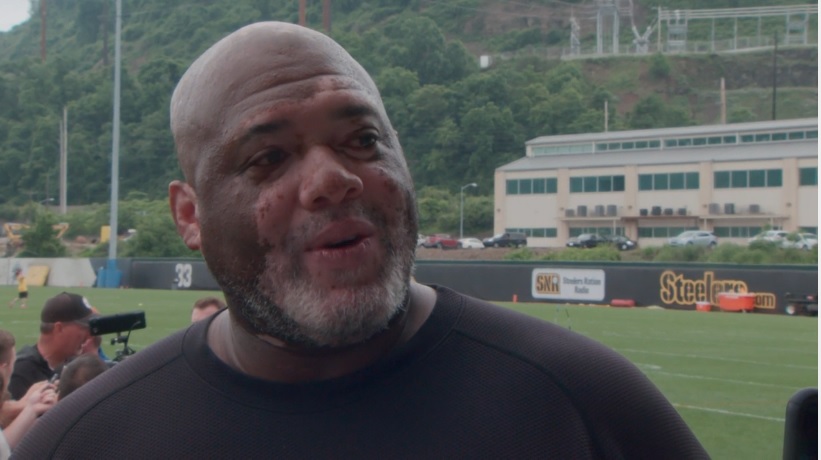 John Mitchell was definitely known as the “tough love” coach during his tenure coaching up the Pittsburgh Steelers’ defensive line. The type rookies hate, probably even fear, but come to love and appreciate once their careers take off.

New defensive line coach Karl Dunbar might not have the exact same mentality but don’t mistake that as a weakness. Expectations for each player remain sky high and Dunbar carries a similar old-school approach.

“I don’t think I’m a millennial coach,” Dunbar replied when asked to define his coaching style. “I think I’m kinda hard-nosed. I believe in paying attention to detail and teaching guys how to do things. That’s the thing as far as talking about relationships with players these days, that’s where I benefit. Getting to know my guys and having fun with them that way. But still be me because I’m a 70s baby.”

Dunbar’s been coaching for a long time too. He got his start with Nicholls State in 1998 as their DL coach. To put that in perspective, 7th round Joshua Frazier was just three years old at that time. Just as the team got in Darryl Drake when replacing Richard Mann, Dunbar brings plenty of experience to the table.

Going over past coaching clinics have given us a perspective into who he is as a coach. One of his biggest points is being a good teammate, rooting for the guys playing ahead of you, and celebrating as a unit, not as the individual.

“When guys are out there cheering for one another, it’s hard to be on the bench moping, complaining,” Dunbar said in a clinic we covered shortly after he was hired. “As long as the guys are out there making plays for us, it’s easy.”

Expect Dunbar to take a slightly softer approach than Mitchell. But don’t expect the standard to change.

“What we teach, we demand,” he said in the same clinic.

Dunbar knows all about coaches who wore their emotions on their sleeve too. His position coach in Pittsburgh was Joe Greene and Dunbar says the two have kept in touch over the years, linking up at the Combine when Greene worked as a scout for the team.

While plenty has changed since being drafted by the Steelers in 1990, one thing remarkably hasn’t. Training camp. It’s still held at St. Vincent College, the same as it was when Dunbar was a rookie.