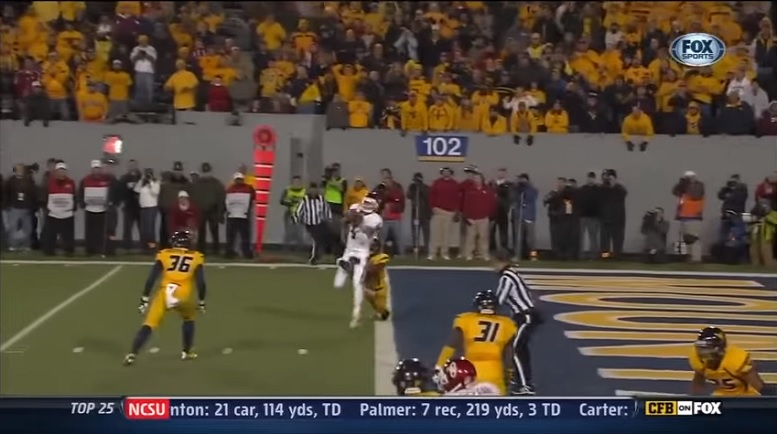 I am now starting to wind down by ongoing series of the contextualization of every pass attempt that new Pittsburgh Steelers quarterback Mason Rudolph made during his 2017 season Oklahoma State. With just a few games remaining to be contextualized, I thought those of you who have been following the series closely would like to have a different quarterback to compare Rudolph to. After long thought, I decided to contextualize the 2012 game between Oklahoma and West Virginia that featured Steelers current backup quarterback Landry Jones.

I chose this game because statistically, it was perhaps Jones’ best game of his final season at Oklahoma. In that 50-49 Oklahoma win Jones completed 38 of his 51 pass attempts for 554 yards with 6 touchdowns and 1 interception.

The play-by-play charting of every pass attempt in the table below includes data such as down, distance, line of scrimmage, quarter, time, and score in addition to other key data such as the player targeted and the direction and distance each pass was thrown. I am also including how many defensive players rushed on each play and if Jones used shotgun and play-action on a play.

As far as Jones’ deep pass attempts (16 yards or longer) in that game against West Virginia, he was 7-of-11 for 127 yards with 2 touchdowns and 1 interception. It should be noted, however, that on five of these deep pass attempts that Jones was flushed from the pocket. One of those attempts resulted in his lone interception of the game. One other deep incompletion against West Virginia was interceptable as well.

7 of Jones’ 51 pass attempts against West Virginia included the football being thrown at a player who was behind the line of scrimmage as part of a screen play or swing pass. All 7 of those passes were completions that resulted in 63 yards being gained.

As for Jones’ third down pass attempts against West Virginia, he was 9-of-12 for 106 yards and two touchdowns. 8 of those 12 attempts included the football being thrown either at the chains or beyond. 8 of his 9 third down completions wound up moving the chains and two of the incompletions were broken up by a defender.

Inside the red zone against West Virginia, Jones was 9-of-10 passing for 59 yards with 5 touchdowns. His final red zone attempt, a completion for a touchdown, came on 4th down with the game on the line.

In total, Jones had two incompletions that were inteceptable while two others were charted as being drops.