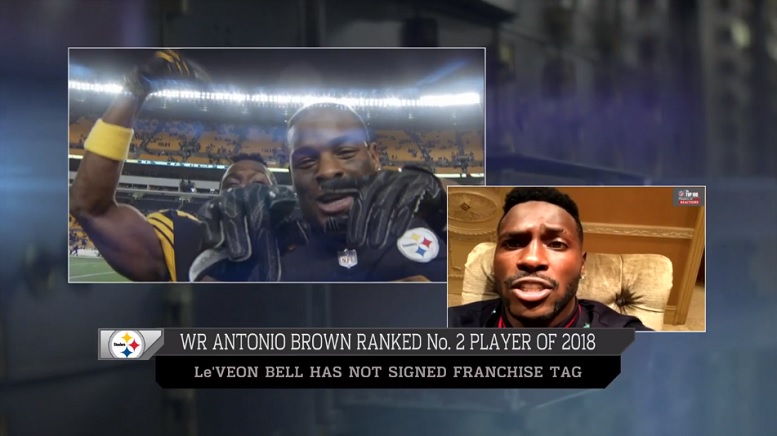 In a little less than three weeks from today we’ll find out if the Pittsburgh Steelers have reached a long-term contract extension agreement with running back Le’Veon Bell. Monday night, Bell sounded optimistic about his chances of ultimately signing a new deal by the July 16 deadline. Additionally, the Steelers other offensive playmaker, wide receiver Antonio Brown, also sounded optimistic Monday night when it comes to Bell signing a new deal by the middle of July.

“No, we’re going to pay him,” Brown said during an interview on the NFL Network following it being announced that he finished ranked No. 2 overall on the channel’s annual top 100 player list.

While Bell obviously doesn’t need Brown’s optimism or voice of approval when it comes to convincing the Steelers that they should sign him to a long-term contract extension, the wide receiver offered it up just the same Monday night when talking about the running back. When asked to comment about what it means to have Bell present for training camp and the preseason as opposed to not having there like last year, Brown heaped praise on his teammate.

“Le’Veon Bell’s the Juice,” Brown said. “You need juice. I drink juice first thing when I get up in the morning – orange juice. And when the game gets thick and it’s on the line, I’m in the huddle saying, ‘Juice we need you. Juice, you got the bag of oranges?’ And he’s a guy who is infectious, not only in a game, but in our locker room and out there off the field. He’s a guy you want to be around, the ultimate competitor. He takes it ultimately serious getting his body in top fitness condition.

If the Steelers and Bell are unable to come to terms on a new contract by July 16, the running back will almost certainly skip training camp and the preseason a second consecutive year. Additionally, it will almost be guaranteed that 2018 will be Bell’s final season in Pittsburgh and thus likely the last one that Brown will be able to call him a teammate of his. Brown obviously hopes that isn’t ultimately the case.

“They got to pay him,” Brown said Monday night.

While Brown finished ranked No. 2 overall in the top 100 players of 2018 list, Bell finished No. 5 overall and deservedly was the No. 1 overall running back. Bell has yet to sign the $14.544 million franchise tag the Steelers gave him in February.

“Hopefully, we’ll try to get something done and that’s what I’m looking forward to. I got confidence we’ll get it done, so I want to do it,” Bell said Monday night.