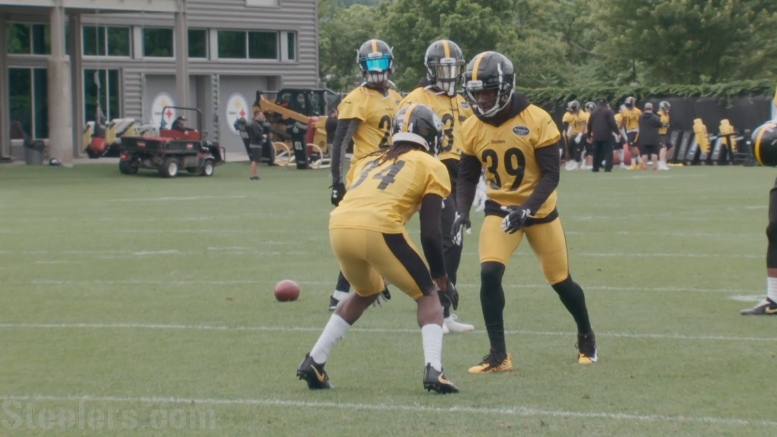 The Pittsburgh Steelers didn’t use their first-round pick on a defensive back just to watch him sit on the sidelines. Terrell Edmunds is already running with the second-team defense ahead of some other players who have been on the team for a longer period of time, such as Jordan Dangerfield, and he has his eyes on a starting job, though he is willing to be patient if that is what it takes.

The safety out of Virginia Tech will very likely be on the field on defense in the season opener as a dime defender, but the Steelers have not installed their dime defense yet, so we don’t know how it will play out. Perhaps we will see this a bit during minicamp this week.

He noted recently that he was getting his hands on passes, but he also dropped a couple of interceptions. In the defensive backs room, players have to pay up when they defend a pass and bat down or drop one that could have been intercepted. They also have to do push ups.

He said that he is getting stronger because of that, both literally and metaphorically. It’s an interesting incentive to help the defensive backs focus in on their ball skills, and the Steelers do need him to become a playmaker in time, even if he is not yet ready to break into the starting lineup.

Edmunds has also sung the praises of Tom Bradley, the team’s new defensive backs coach, who is a stickler for mechanics. He has thrown a lot at Edmunds and the younger players, but he said he is able to handle it.

He also once said that he never gets tired in practice because he focuses so much on his conditioning, and offered that that hasn’t changed yet through the first month of his career as a professional football player.

As regular readers should know, conditioning is a great way for young players to get onto the field early. That’s a big reason why Sean Davis played immediately during the 2016 season. The same for last year’s top two draft picks.