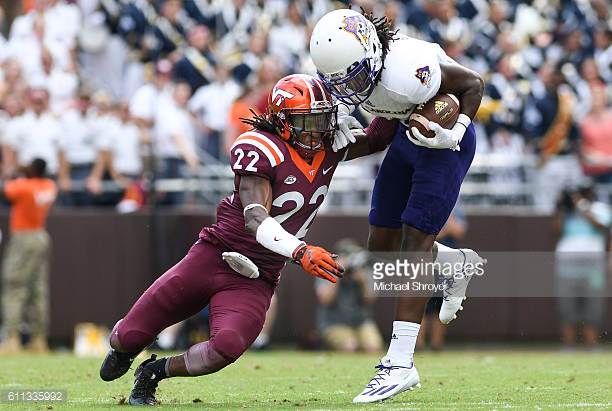 The Edmunds duo, Tremaine and Terrell, have plenty in common. They’re brothers, attending the same school, having a high degree of success, and became the first siblings ever draft in the first round on the same night. But they’re not identical. One difference? Their personalities and to Virginia Tech head coach Justin Fuente, it’ll be an asset to Terrell.

Joining Steelers.com’s Missi Matthews yesterday, Fuente said Terrell’s outgoing personality shows itself on the field, making him a key communicator for the defense.

“The guy is incredibly intelligent,” Fuente said. “He is an outgoing person. When you play in the secondary, whether that’s in college or the NFL, you have to communicate so that everyone is on the same page. He is a willing communicator. He enjoys that part of it, he’s an outgoing person to begin with.”

Tomlin and Colbert highlighted that ability after selecting him last Thursday.

In the interview with Matthews, Fuente gave an example of that of that high football IQ.

“We’re playing Clemson and for about eight snaps, he played corner against some pretty darn good people. He’s just incredibly versatile, incredibly intelligent. I think he’s got a bright future.”

It all falls in-line with the team’s “hearts and smarts” motto. T.J. Watt was drafted partially for how quickly he was able to pick up playing linebacker at Wisconsin. Cam Sutton wowed the coaching staff with his knowledge of every defenders assignment. Edmunds is a combination, starting early in his career and having a great grasp of the defense he helped run.

Edmunds is expected to begin his career at safety, though trying to get any more specific is going to be difficult. Maybe that comes at free, strong, or in the dime linebacker role. None of that will be sorted out until the team gets through the preseason.

Colbert said their goal was to get an athletic, young prospect in the secondary. By all accounts, that’s what they have with Terrell Edmunds.