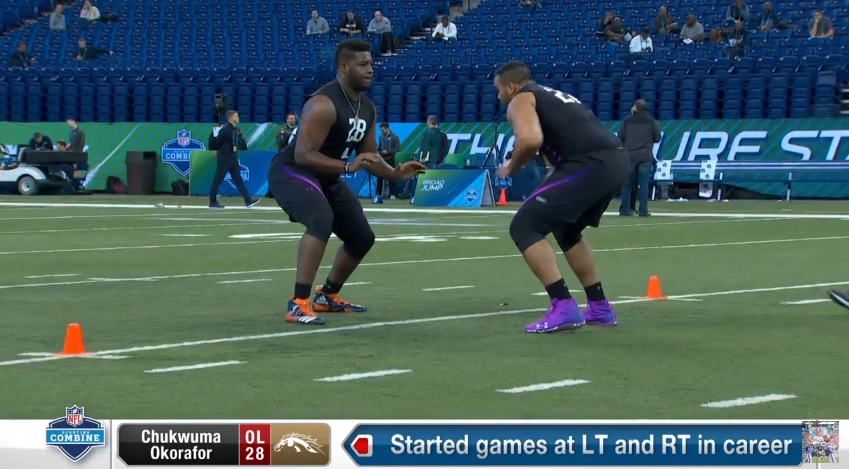 I would say that the Pittsburgh Steelers’ selection of offensive tackle Chukwuma Okorafor in the third round of the 2018 NFL Draft was the most polarizing draft pick of the weekend for the team. I would say that, but it’s not true, because instead it seems to have been a near-consensus least favorite pick. Many don’t even see the sense in the team drafting him in the first place.

Even Okorafor’s college coach was surprised when the Steelers selected him in the third round—but not because it didn’t make sense, or because he expected him to go later. In fact, his surprise was just the opposite.

Western Michigan assistant coach Bill Kenney told Joe Rutter of the Pittsburgh Tribune-Review that he though Okorafor could be a day-one offensive tackle. And to be fair, it wasn’t a totally outlandish suggestion, considering that three tackles went in the first round, with Mike McGlinchey, Kolton Miller, and Isaiah Wynn all going off the board.

“We thought he’d be a first-day guy”, Kenney told Rutter. “We thought if he fell to the second day, it would be early on”. But it wasn’t early on in day two either that Okorafor was selected; in fact, he had to wait until near the end of the third round, with the 92nd-overall selection.

Chukwuma is considered a prime developmental talent. He did not grow up with the game of football, and spent most of his adolescence living in Africa. He did not begin playing football until he was a junior in high school. And he is just 20 years old now.

“He comes with a rare combination of strength, size and athleticism”, Kenney said. “He’s an unusual guy in the fact that it’s hard to find big men that can move like that and have that nimbleness that can take a 325-pound body and move it like a feather”.

While he did not test exceptionally well at the Combine, placing toward the middle of the pack among offensive linemen for most workouts, his college coach called Okorafor “a rare combination of strength, size and athleticism”, and “an unusual guy in the fact that it’s hard to find big men that can move like that and have that nimbleness that can take a 325-pound body and move it like a feather”.

Rutter notes that Kenney has had quite a bit of success in coaching offensive linemen that have gone on to play in the NFL. Prior to his tenure at Western Michigan, he spent a long time with Penn State, where he saw 25 linemen and drafted and another five sign as free agents. The article also notes that Western Michigan is the only school outside of the Power 5 conferences to have a lineman drafted in each of the past three years.

So it’s noteworthy that Kenney said Okorafor was among his best pupils. And he also recognizes that his player is going into a great system. He told him after he was drafted that he was going to “the best line coach that is out there”.