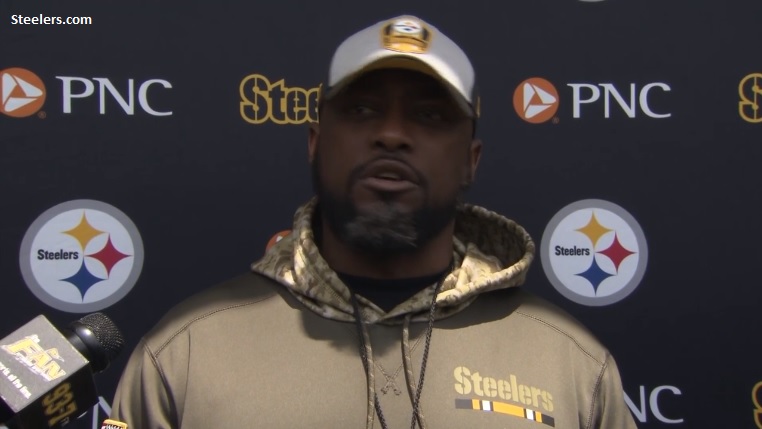 The Pittsburgh Steelers used two of their seven draft picks this year on safeties and while we still have a long wait until we find out how both Terrell Edmunds and Marcus Allen will ultimately fit into the team’s defensive plans in 2018, it sounds like the two players are already doing a good job during the team’s annual rookie minicamp taking place this weekend when it comes to their roles as communicators.

“The way that you stand out at this juncture is just simply communicating, or willingness to communicate,” Steelers head coach Mike Tomlin said following the team’s Saturday rookie minicamp practice when asked how both Edmunds and Allen are doing so far this weekend when it comes to them both picking up on the various roles and positions they are already being asked to play. “I like to hear a lot of pre-snap chatter. Both guys are providing that. It shows you a lot of things. It shows you that they’re into it, they’re situationally aware.”

Edmunds, the Steelers first-round draft pick this year, revealed after the team’s first minicamp practice on Friday that he played some safety and linebacker during that session. He also indicated on Friday that he and Allen, the Steelers first of two fifth-round draft picks this year, were also making some of the defensive calls during that first practice as well.

“Yes, I am calling the calls,” Edmunds told the media after Friday’s practice. “Marcus Allen and I were both calling it back-and-forth. We have a lot of communication between us, too, because we both can be interchangeable at the position. So, that is just what we are doing now.”

Quite a few times the last couple seasons we’ve heard a few Steelers defensive players and coaches talk about how poorly the communication on the field has been at times during games. The team seemingly addressed that communication element as part of them deciding which free agents to sign earlier in the offseason and it resulted in linebacker Jon Bostic and safety Morgan Burnett ultimately being signed. Both players have already established themselves as strong defensive communicators during their NFL careers.

Tomlin spoke more after Saturday’s rookie minicamp practice about the importance of getting strong communication out of the safety position and how both Edmunds and Allen appear to be on their respective ways to hopefully mastering that element of their play down the road.

“The safety is a communicating position, so that’s a job requirement,” Tomlin said. “It also shows that they’re capable of learning things we’re presenting them in the classroom and taking it out to the field. So, less evaluation in terms of what they are doing physically. I like what I’m hearing from them prior to the ball being snapped. It’s an indication of it’s been a good weekend for them.”