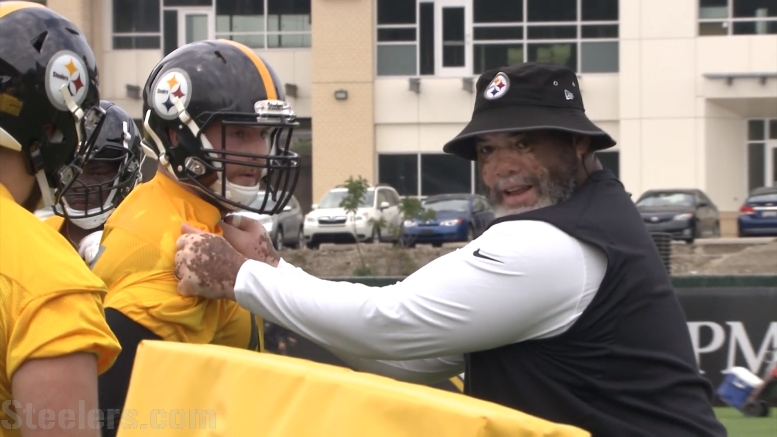 The Pittsburgh Steelers have a new face coaching their defensive linemen for the first time since the 1993 season, just the second year under Head Coach Bill Cowher. From 1994 through the 2017 season, the man responsible for whipping the defensive line into shape had been John Mitchell, but he has taken a step back for 2018 to let another man do the job.

That man, Karl Dunbar, may not necessarily be a John Mitchell disciple, but Mitchell did coach him in college at LSU. Dunbar also worked under Head Coach Mike Tomlin in 2006 when the latter was the defensive coordinator of the Minnesota Vikings.

So while he might be new on the team—not that new, though: he was originally drafted by the Steelers in 1990—there is a certain familiarity with him and his work that makes the transition easier, though there are of course changes.

Defensive end Stephon Tuitt thinks the transition from Mitchell to Dunbar has “been going good so far”, as he told Joe Rutter. While he offered that it’s too early to really explain, he said that the linemen are “taking his philosophies and working hard to get better”.

As is common knowledge on this site, the defensive line coach has spent the past two seasons working at the college level at Alabama, and he has had a hand in training a number of NFL-quality talents already, just in those two seasons. The Steelers even drafted one of them in Joshua Frazier, a seventh-round defensive tackle. They never drafted an Alabama defensive lineman while Mitchell, an Alabama alum, was the coach.

Tuitt said that Dunbar doesn’t have quite the same…uh, volume to his voice as Mitchell has, but told Joe Rutter that he “still does a lot of communicating, a lot of talking and emphasizing pass-rushing drills”. Dunbar has said that linemen have to earn the right to pass-rush by being diligent in the rest of their responsibilities.

While the two coaches have “different type of styles”, according to Tuitt, “they both want the same thing, and that’s what is best for the defensive line”.

What would really help the defensive line is a cleaner bill of health. All three of their starters have dealt with significant injuries over the past two seasons, including Tuitt himself with an arm injury suffered on the second snap of the season that lingered throughout the year. Javon Hargrave also dealt with a bothersome back for the last several weeks of the season.

There are a couple of videos available on the team’s website that show just small glimpses of Dunbar working with the defensive linemen, including a couple of hands-on moments. I’m sure some of the beat writers have also shared a clip or two.

It’s going to be interesting to see what the new defensive line coach brings to the table and how that might translate into tangible differences on the field. One thing we do know is that he has some talent to work with, including All-Pro Cameron Heyward.