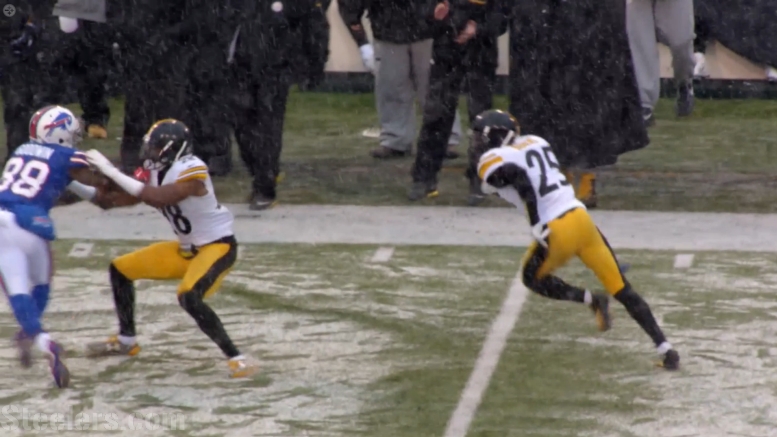 I came across an article yesterday published by Pro Football Focus detailing the top 25 players heading into the 2018 season that were under the age of 25—in their estimation, of course. I clicked on it wondering if I would see the names of any members of the Pittsburgh Steelers on it. I did not. So it got me to wondering: what does the Steelers’ under-25 talent look like right now?

There are currently 43 players on the 90-man roster who are under the age of 25, but that is obviously not representative. The majority of them are rookies, undrafted free agents, and similarly unaccomplished players. For perspective, only 11 of them were on the 53-man roster a year ago.

I should preface this by adding that I didn’t go ahead and look into which players who are currently 24 years old might turn 25 before the season starts. I really don’t think we need to get that specific over an arbitrary dividing line.

The starters on the team under the age of 25 are largely concentrated in the secondary, including Sean Davis and Mike Hilton, both 24, and Artie Burns, who only recently turned 23. The other starters or borderline starters under the age of 25 are tight end Jesse James, outside linebacker T.J. Watt, and wide receiver JuJu Smith-Schuster, who is among the youngest players on the team.

The remaining players from the 53-man roster (or injured reserve) from a season ago are Cameron Sutton, Brian Allen, Keion Adams, Jerald Hawkins, James Conner, and Joshua Dobbs. Of those six, only Sutton has started a game, while the majority of the rest have only a handful of snaps under their belt at most.

Then you have the entire rookie class, including a number of players who are 21 years old or even younger. Terrell Edmunds, James Washington, Mason Rudolph, Chukwuma Okorafor, Marcus Allen, Jaylen Samuels, and Joshua Frazier are an influx of young talent, but as exhibited by past draft classes, we know that the hit rate will not be 100 percent. Some might not even make the roster.

Pittsburgh does not have any Pro Bowlers under the age of 25, though they do have a couple of worthy candidates with Smith-Schuster and Watt. It would not be shocking if either of them make a Pro Bowl by the time they turn 25, though Smith-Schuster obviously has the better chance of doing that.

We still have a lot to learn about the rookie class, and what they will be in time, but they have time on their side. Edmunds, Allen, Samuels, and Okorafor are all no older than 21 years old. The latter of the four, in fact, is only 20 years old. Rookie undrafted free agent Olasunkanmi Adeniyi is also 20.

The Steelers have a relatively young roster overall, with a lot of potential. But it’s time to start converting that potential into actual production.